When a 44-year-old man noticed a lump on his neck in the fall of 2019, he was particularly concerned because he had been treated for an olfactory neuroblastoma, also known as esthesioneuroblastoma, some 15 years previously. A local otolaryngologist performed a biopsy that confirmed a recurrence of his cancer and immediately referred the patient to the Duke Skull Base Center for its expertise in this rare form of cancer.

“A condition that is considered rare is not that rare for us because we treat similar tumors on average once or twice a week,” says Ralph Abi Hachem, MD, MSc, the director of the Skull Base Center who oversaw his treatment. Abi Hachem is a head and neck surgeon with a special interest in endoscopic sinus and skull base surgery.

Abi Hachem recognized that this recurrence would be complicated to treat because in 2005 the patient had undergone surgery to remove the original tumor in his sinus cavity followed by radiation therapy. In addition, the cancer not only extended into the brain but had already metastasized to the neck, a situation requiring multi-faceted treatment.

Question: What treatment plan would be needed to address this complex recurrence of the olfactory neuroblastoma?

Answer: A multi-disciplinary team developed a staged approach involving several specialists. Treatment began with chemotherapy to shrink the tumors, followed by neck surgery to remove the diseased lymph nodes, combination surgery on the nasal cavity and brain, and follow-up proton radiation treatment. The Duke Skull Base Center offered a specialist in each aspect of the first three therapies, and a referral for the radiation to a proton center.

PET scans revealed that the cancer had not spread beyond the neck, so the treatment centered on the head and neck tumors, which were large.

“We needed to shrink the tumor because it was so bulky when he came to us. He had a 4-cm neck mass,” Abi Hachem says. “Fortunately, we have an oncologist who specializes in head and neck cancers and brain cancers, and she gave him two rounds of chemotherapy.”

The next procedure, on the olfactory tumor, was much more complex both because the olfactory neuroblastoma had broken through the nasal cavity and skull base into the brain and because of the presence of scar tissue and residue from the prior surgery and radiation treatment.

“We did a combination approach where we went through the nostril with an endoscope, and we also made an incision from one ear to the other along the superior edge of the head,” Abi says.

Abi did the endoscopic nasal portion and teamed up with neurosurgeon Patrick J. Codd, MD, who did a frontal craniotomy to remove the portion of the tumor in the brain. They used tissue from the septum and a pericranial flap from underneath the scalp to reconstruct the skull base. The patient responded so well that he was discharged from the hospital five days post-surgery.

Because the patient had received radiation therapy to treat the original occurrence, the Duke team looked for an alternative. They referred the patient to receive proton therapy at M.D. Anderson in Houston, one of the few medical centers in the country offering the technique. “Proton therapy can give you very targeted radiation and spare radiation to nearby critical neurovascular structures such as the optic nerve,” Abi says.

The patient is doing well since completing his treatment. He has returned to work and his life as a husband and father of two young children, but Abi’s team will continue to monitor his status. “Usually you are considered cured from cancer five years after treatment, but this specific cancer can recur later on,” Abi says. “At Duke we follow these patients forever because history has taught us that these types of tumors can recur remotely.”

Abi Hachem adds that the Duke Skull Base Center aims to provide excellent care to patients through a multidisciplinary team of specialists and nurse navigators to support patients and coordinate their care.

The center also seeks to improve future treatment as an NIH-supported center researching new therapies for rare cancers: “One of our goals is to attract olfactory neuroblastoma patients so we can help them in an optimal fashion and culture their tumors in the lab. We are collecting these tumors to identify specific genetic mutations in order to develop and test targeted therapies. Not a lot of money is invested toward these rare tumors, but we think even ‘orphan tumors’ deserve research and investment. Our olfactory research center, led by Bradley Goldstein, MD, PhD, is well-positioned to make breakthroughs in advancing the treatment and management of these tumors and improve the lives of our patients and their loved ones.” 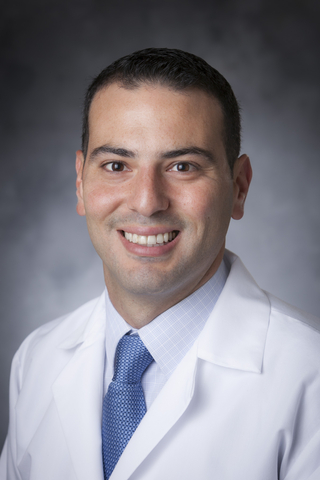