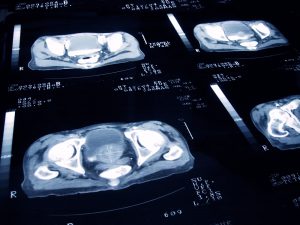 Recent trials, led in part by Duke researchers, have established the efficacy of novel hormonal therapies abiraterone and enzalutamide in men with metastatic prostate cancer. In newly published studies, researchers are now exploring the practical aspects of the androgen receptor inhibitor enzalutamide for treating metastatic castration-resistant prostate cancer (mCRPC). One of the studies, published recently in the journal Cancer, associated levels of post-treatment prostate-specific antigen (PSA) decline after enzalutamide treatment with clinical outcomes in the postchemotherapy mCRPC setting.

The new studies are follow-ups to 2 large, phase 3, international clinical trials. In the first—the AFFIRM trial—investigators confirmed the efficacy of enzalutamide for the treatment of patients with mCRPC who previously received docetaxel. Andrew Armstrong, MD, MSc, associate director for Clinical Research in Genitourinary Oncology at the Duke Cancer Institute and one of the Duke site's principal investigators for the trial, reports that the trial showed a significant increase in overall survival and a significant decrease in PSA levels in patients treated with enzalutamide compared with those who received placebo, leading to the 2012 US Food and Drug Administration (FDA) approval of enzalutamide for the treatment of mCRPC.

The subsequent PREVAIL trial, which enrolled a large number of Duke patients, examined enzalutamide in metastatic prostate cancer before chemotherapy. Results were published in the New England Journal of Medicine in 2014, leading to an expanded FDA approval of enzalutamide for all men with mCRPC based on improvements in survival, quality of life, and progression-free survival. Armstrong, who was also a lead site investigator at Duke for this trial, notes that these early studies demonstrated that enzalutamide is a highly effective drug that improves survival rates and controls the disease. A similar agent, abiraterone acetate, has also been established in this setting, and these 2 agents provide new and effective choices for men facing aggressive prostate cancer.

The recently published studies go a step further. Armstrong presented Duke’s latest research at the 2017 international conference of the European Society for Medical Oncology (ESMO) in Madrid in September. The study (abstract 787PD, page 270), evaluated how well changes in PSA levels following enzalutamide treatment predict prognosis and long-term survival rates in men who have not yet received chemotherapy. “Our research found that a higher decline in PSA level means tumors will shrink more, that it takes longer for the disease to progress, and that it is associated with greater life expectancy,” he reports. “These results suggest that a 3-month PSA can identify men likely to have extraordinary responses and clinical benefits and can allow for an individualization of care and prognosis over time.”

Armstrong is optimistic that results from future studies will guide treatment and improve outcomes for patients. “For example, we’re exploring newer hormonal therapies, such as abiraterone and enzalutamide together, in combination with immunotherapies, in earlier settings of prostate cancer to improve cure rates with radiation following surgery, and in combination with new, molecularly targeted agents. Finally, we’re examining liquid biopsies to measure predictive biomarkers to identify men most likely to benefit from these therapies.”