Long-awaited results from the Catheter Ablation versus Antiarrhythmic Drug Therapy for Atrial Fibrillation (CABANA) trial—one of the largest and most significant ablation assessments—demonstrated that ablation is a reasonable and safe strategy for patients with atrial fibrillation (AF).

“By intention-to-treat analyses, the trial was neutral for the primary composite endpoint of death, disabling stroke, serious bleeding, or cardiac arrest,” says Tristram B. Bahnson, MD, an electrophysiologist who was the Duke site’s principal investigator. Electrophysiologists monitoring the trial have highlighted the positive findings demonstrating that patients treated with ablation experienced significant reductions in clinical events, such as cardiovascular hospitalization and death, and were less likely to have recurrent AF. 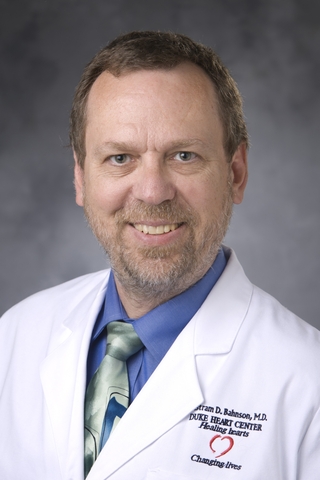 CABANA was notable due to the number of participants, the duration of the trial, and the length of median follow-up,” says Tristram B. Bahnson, MD, a Duke eletrophysiologist. “The findings involving safety of ablation in CABANA were outstanding.
Tristran B. Bahnson, MD

The trial enrolled 2,204 patients with a median age of 68 years and with significant cardiovascular comorbidities. Patients were randomized to catheter ablation or medical therapy. Median follow-up was 49 months.

Duke Heart played a significant leadership role as the coordinating center for the overall conduct of the trial and as an enrolling site. Professor emeritus of biostatistics and bioinformatics Kerry L. Lee, PhD, and cardiologist Daniel B. Mark, MD, were project leaders. Bahnson contributed 133 patients, accounting for six percent of the trial subjects, placing Duke as one of the top three enrolling centers worldwide.

“CABANA was notable due to the number of participants, the duration of the trial, and the length of median follow-up,” says Bahnson. “The findings involving safety of ablation in CABANA were outstanding.” Given the large group of patients with AF, ablation emerged as a reasonable, safe strategy, he concludes.

Patients in the trial with paroxysmal and persistent AF were represented in near equal proportions, and 37 percent were women. Additionally, electrophysiologists participating in CABANA had to qualify based on their past experience and procedural results.

The top-line results were presented in July during the Heart Rhythm Society 2018 Scientific Sessions. The primary CABANA findings, as well as details on quality of life and AF recurrence, are being submitted as late-breaking results to the 2018 European Society of Cardiology Congress.

(These images above, provided by Bahnson, depict two views of the segmented left atrium, created with an electro-anatomic mapping system during a therapeutic catheter ablation procedure to treat atrial fibrillation. The colors represent intracardiac electrogram amplitude obtained with high resolution mapping with red signifying no measurable electrograms and purple normal electrogram voltage. The red areas correspond with the pulmonary veins that were electrically isolated during the ablation procedure as confirmed by the finding of no electrogram activity. The dots around the pulmonary vein antra depict the ablation lesions delivered to create pulmonary vein isolation).