An innovative and relatively rare pulmonary vascular remodeling therapy offers a non-surgical option for patients who present with chronic thromboembolic pulmonary hypertension (CTEPH) but are not candidates for pulmonary thromboendarterectomy (PTE). The Duke Pulmonary Vascular Disease Center, one of the nation’s leading CTEPH treatment centers, has been offering balloon pulmonary angioplasty (BPA) since May of 2018.

“We have learned that BPA is much more effective when performed in limited fashion over several sessions, perhaps up to three to five times depending on the number of lesions that are approached,” says Krasuski. “In this way it can be a remarkably effective and lower risk therapeutic option.” The best results occur when increased blood flow in the widened vessels is given time to promote natural healing.

The technique was adopted from pediatric cardiologists, who pioneered specialized ballooning and stenting techniques to improve blood flow in congenitally narrowed pulmonary vessels. Krasuski studied the procedure’s application for patients with pulmonary hypertension under one of the world’s most experienced interventionists in Japan, where BPA is a more common performed procedure.

The Duke Pulmonary Vascular Disease Center is one of the leading centers for CTEPH treatment in the nation and one of only a few offering the option of BPA. In addition to PTE and BPA, the center offers medical therapies including riociguat, a soluble guanylate cyclase stimulator approved for treated of inoperable CTEPH. Based on the growing number of patients eligible for and choosing the BPA option, the Duke pulmonary vascular team projects an average of at least one to two cases per week by the end of 2019.

BPA does involve risks—metanalyses generally project around a three percent mortality risk with the procedure—but the more complex, invasive PTE introduces even more risk in this very sick patient population.

“The most definitive therapy for CTEPH is surgical,” Krasuski says. “But not everyone is an optimal surgical candidate. BPA offers another option to improve quality of life in these severely functionally limited patients.” Extent of disease, location of lesions, obesity, pulmonary function, and age are significant factors in determining the choice of either PTE or BPA in the CTEPH patient. 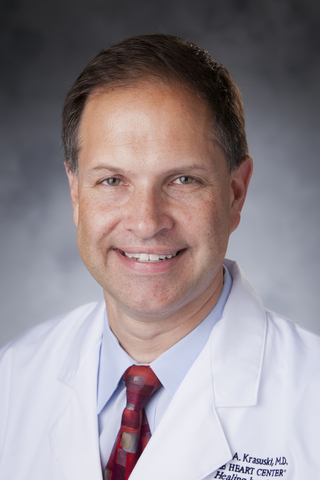