A 13-year-old boy tore his ACL while playing soccer. His father knew that Duke Health offered special expertise for young athletes, so he sought an opinion from orthopaedic surgeon Brian C. Lau, MD, who specializes in repairing ACL tears in children and adolescents.

Standard ACL reconstruction for adults involves drilling tunnels through the bone to thread through grafts from the quadriceps, hamstrings, or patellar tendon, but in children these tunnels would injure growth plates and affect their growth.

“Historically, the treatment for younger kids has been to tell them to wait until they get skeletally mature, and we will repair your ACL as we do in adults,” Lau says. “But the problem is that you can’t keep a kid from playing sports for their whole adolescence, so they end up further injuring their meniscus and cartilage.”

What option was offered to this young soccer player?

Lau offered the child a specialized technique tailored for his age group - physeal-sparing surgery, which avoids the growth plates completely.

The technique involves using a strip from the IT band that remains attached at the tibial end. “Then you bring that whole strip in what we call ‘over the top.’ You wrap it over the femoral condyle and down through the joint, under the intermeniscal ligament. You suture it to the periosteal flaps on the front of the tibia.”

The technique is “not anatomic,” Lau says, but the repair can remain in place indefinitely as patients grow into adulthood and their skeletons mature. If they are re-injured later in life, they have retained the tendons required to make standard, anatomic adult surgery an option.

Duke’s unique rehabilitation and “return-to-sports” testing program has been shown to make re-injury significantly less likely, however. “The program involves a battery of tests of balance, function, strength, and mental readiness,” Lau says. “We have objective criteria that they must meet before returning to play. It gives athletes, parents, and coaches something to aim for. His ACL may feel great in an exam room, but we want to know what it’s like when he gets a little fatigued out on the field. It ensures that they are completely recovered before they return to play.”

After his surgery in April 2021, the patient began weekly physical therapy sessions designed by specialists in soccer injury treatment and prevention. After progressing to lifting weights and other exercises, he was recently cleared to return to play. 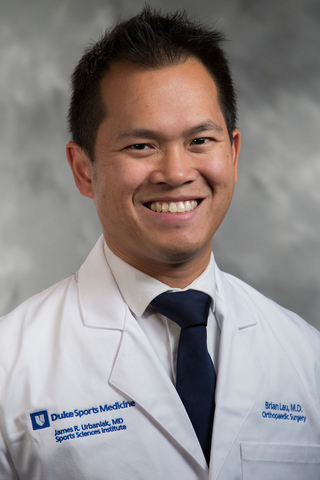