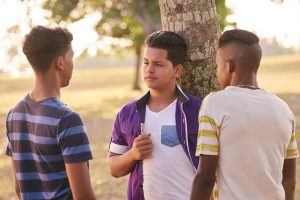 The sharply increasing use of electronic cigarettes and vaping devices—particularly among adolescents who may perceive them as safe—combined with physicians’ limited knowledge of their long-term risks have prompted Duke pulmonologists to adopt a proactive public health posture by emphasizing that vaping devices may convey some risk to users.

Introduced in 2007, the electronic products deliver an aerosolized liquid usually containing a blend of propylene glycol, vegetable glycerin, and varied flavors that may or may not contain nicotine. The devices are viewed by some as safer alternatives to cigarette smoking, particularly among smokers who want to quit.

Duke interventional pulmonologist Momen M. Wahidi, MD, MBA, who cares for many patients with lung disease caused by smoking, acknowledges that these devices are safer than smoking—and a reasonable alternative for cigarette smokers—but present risks. “We don’t fully understand the long-term impact of these products,” Wahidi says.

Wahidi cites the low quality of evidence from some clinical trials indicating that e-cigarettes may help smokers quit the cigarette habit. He also notes that the trials have been unable to confirm whether e-cigarettes are superior to the traditional smoking cessations aids such as nicotine patches.

In the United States, 15% of the population smokes cigarettes. In North Carolina, the percentage is 21%--down from more than 30% a decade ago. Tobacco use is generally higher in states with a history of tobacco production. Wahidi and Giovacchini express concerns that the growing use of vaping devices may encourage cigarette use at a young age. Giovacchini cites research from the 2015 NC Youth Risk Behavior Survey indicating that 4.6% of middle school students and 37.2% of high school students have reported ever-use of electronic cigarettes.

Of greater concern to Wahidi and Coral X. Giovacchini, MD, a Duke interventional pulmonology fellow, are the potential public health risks related to vaping among middle-school and high-school students, many of whom believe that the electronic devices are safe because they do not contain tobacco.

Giovacchini, lead author of an NC Medical Journal study examining the use and perceived risk of electronic cigarettes among North Carolina middle and high school students, encourages stronger public health intervention among these students before they begin high school.

“Risk perception is a big concern,” says Giovacchini, who emphasizes that the physical effects of the devices are unknown. “The argument against their use requires a slightly different approach because we acknowledge that electronic devices and vaping are less harmful than tobacco products for smokers. Middle and high school students see vaping as less risky than cigarettes—they see their parents using the devices.”

She also says that the gradual decline in smoking rates may stall if vaping and electronic cigarettes become starting points for cigarette use. There are few US-based studies about the link between vaping and cigarettes, but some European studies suggest that vaping users are 4 times more likely to start conventional cigarettes.

Both Wahidi and Giovacchini caution that the rising numbers of vaping users may impede the progress of reducing cigarette smoking. “When you see the offerings of flavors such as raspberry and cola in highly appealing vaping devices, you begin to normalize smoking again and risk introducing young people to one of the most addictive substances for humans: nicotine,” Wahidi says.