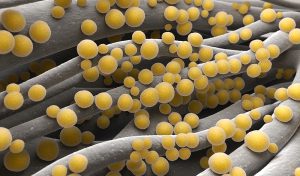 The results of a large, randomized trial confirming the effectiveness of short-wave ultraviolet (UVC) light in reducing the transmission rate of 4 "superbugs" were published February 25, 2017, in The Lancet. Led by Duke Health, the randomized trial recorded more than 600,000 hospitalizations across 9 participating hospitals in the southeastern United States and included more than 21,000 patients.

Radiation produced by UVC machines reduced the cumulative rate of transmission by 30% in methicillin-resistant Staphylococcus aureus (MRSA), vancomycin-resistant enterococci, Clostridium difficile, and Acinetobacter species, according to the study. The finding was specific to patients hospitalized overnight in a room where a previous patient had stayed who received treatment for infection with or had a known positive culture of a drug-resistant organism.

"Some of these germs can live on in the environment so long that, even after a patient with the organism has left the room and it has been cleaned, the next patient in the room could potentially be exposed," says Deverick J. Anderson, MD, an infectious diseases specialist at Duke Health and lead investigator of the trial.

The preliminary, unpublished results were first reported in the April 26, 2016, issue of Clinical Practice Today.

From 2012 to 2014, the researchers examined the effects of standard disinfection with quaternary ammonium and 3 other cleaning methods:

The participating facilities used SmartUVC (Tru-D, Memphis, TN), a portable UVC machine to disinfect rooms where patients with the target bacteria had been staying. The machine emits UVC light into an empty room for approximately 30 minutes. UVC light bounces and reflects into difficult-to-reach areas such as open drawers or between cabinets and fixtures. The UVC light waves are lethal to bacteria because they disrupt bacterial DNA.

The researchers focused on MRSA, vancomycin-resistant enterococci, C difficile, and Acinetobacter species because they're drug-resistant organisms that cause difficult-to-treat infections.

Overall, the most effective strategy was using quaternary ammonium followed by UVC light. In addition to the observed 30% decrease in the overall transmission rate, UVC also effectively reduced the transmission of MRSA by 22%.

"Infections from one of these bugs are tough and expensive to treat and can be truly debilitating for a patient. For hospitals, these infections also cause a burden of costs that often aren't reimbursable," says Anderson.

Some hospitals have already begun using UVC machines in combination with standard chemical disinfection to kill potentially dangerous bacteria, such as MRSA, but prior research on their effectiveness had so far been preliminary.