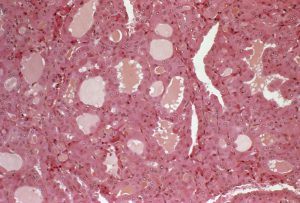 Radioactive iodine therapy (RAI) should be used in patients with Hürthle cell carcinoma whose tumors are larger than 2 cm in size as well as in patients with nodal and distant metastatic disease, according to study results from Duke Health investigators. The results were published online last June in the journal Thyroid.

To determine whether RAI use is associated with overall survival, researchers reviewed the results of 1,909 adults in the National Cancer Database with a diagnosis of Hürthle cell carcinoma who also underwent total thyroidectomy between the years 1998 and 2006.

To assess administration patterns of RAI, the cohort was limited to patients with tumors of at least 2 cm and those with T1-staged tumors with lymph-node metastasis, distant metastasis, or both.

“The implication for clinical practice is that, based on these new data, unless contraindicated, clinicians can now recommend that patients with Hürthle cell cancers of at least 2 cm or those with local and/or distant metastases undergo post-thyroidectomy RAI treatment,” Sosa says.

Overall, 60.9% of participants received RAI. The database showed these patients were younger and more likely to have private insurance and be treated at an academic center compared with those who did not receive RAI.

No difference was seen between surgical centers with higher or lower thyroidectomy volumes or between community or academic centers using RAI. A 30% reduction in mortality was independently linked to RAI administration.

In a related article in Endocrine Today highlighting the study, Sosa warns that the observed variation in RAI administration implies inconsistent quality of care nationally for patients with Hürthle cell carcinoma.