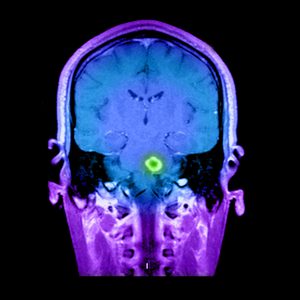 During a 2-week period, a healthy 30-year-old woman experienced a sudden decline in her overall health. She exhibited confusion, altered mental status, diffuse weakness, dysphagia, and difficulty speaking. Findings on magnetic resonance imaging (MRI) of her brain were suspicious for an inflammatory autoimmune disorder such as multiple sclerosis (MS).

She was treated with high-dose intravenous steroids to little effect, and her health continued to deteriorate. She soon lost all ability to swallow, and a nasogastric tube was placed.

Plasmapheresis to remove autoantibodies and other inflammatory factors was similarly unsuccessful; rather than her condition improving, the patient lost the ability to move her arms and legs and could no longer speak more than a few words at a time. She was referred to the Department of Neurology at Duke.

Question: What treatment reversed many of the patient’s symptoms?


Answer: The patient was given monthly infusions of cyclophosphamide, which helped her regain some mobility and her ability to swallow and speak. The lesions in her brain also began to shrink.

At Duke, findings on MRI confirmed the presence of large, inflammatory lesions in the patient’s brain. However, the imaging looked unusual for MS, so lumbar puncture and brain biopsy were also performed to rule out infection or tumor. Neurologist Christopher Eckstein, MD, determined that the patient’s condition was most likely a form of tumefactive MS.

“By the time I first examined the patient, she was bedbound, couldn’t move her arms or legs, and could barely speak,” says Eckstein. “Given the extent of brain involvement and how she looked, she wasn’t going to make it much longer, so we decided to give her chemotherapy-level immunosuppression.”

Slowly, the patient’s condition stabilized. After several infusions, she was moved from the hospital to a rehabilitation center. Eventually, the nasogastric tube was removed, and she regained the ability to speak.

After 7 infusions, Eckstein reports that the patient has returned home where she is working with a physical therapist to begin walking again. She will soon be taken off cyclophosphamide and switched to an immunomodulatory treatment for MS.

“You don’t want to leave patients on cyclophosphamide long term because of some of the long-term risks,” Eckstein explains, “But I’d be very cautious about taking her off treatment altogether, since I’m concerned the lesions and inflammatory symptoms would return.”

He adds that, although some physicians may not be comfortable using cyclophosphamide because of its potency and potential for adverse effects, it was an important option for this patient. “It’s uncommon to have someone fail steroids as well as plasmapheresis and just keep getting worse no matter what,” he says. “It’s important that people know we have additional options that can be used when conventional acute therapies fail.”