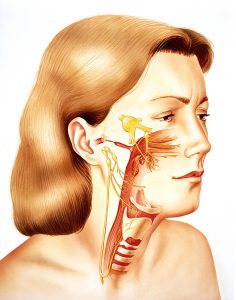 A 49-year-old woman who worked as a nurse in an intensive care unit presented to her primary care physician with stabbing, electrical pain in her head and face. The physician prescribed carbamazepine and baclofen to try to help her with what she believed to be neuralgia.

The medications helped ameliorate the pain, but she experienced serious adverse effects, including impaired cognitive function, balance, and coordination. In addition, soon after her consultation, she had an abscessed tooth removed and developed tension headaches and right-sided neck, shoulder, arm, and hand pain.

With the pain unrelenting and its cause essentially unknown, she consulted Duke neurologist Wolfgang Liedtke, MD, PhD, who focuses on researching and treating occipital and trigeminal neuralgia as well as trigeminal sensory disorders.

Question: How did Liedtke help manage the patient’s pain?

Answer: Based on the patient’s positive response to the antineuralgic pain effect of carbamazepine, Liedtke added lacosamide to her medication regimen. The treatment significantly reduced the intensity of her pain, and she experienced fewer adverse effects. After her pain was stabilized, he switched her to low-dose naltrexone—a drug with few serious adverse effects—which permitted dosage reduction of the other medications. He also helped her make lifestyle changes to reduce her stress level and, thus, her susceptibility to chronic neuropathic pain.

Liedtke first confirmed that the patient’s pain was not caused by a residual dental pathology that the previous oral surgery had left behind. He also performed a battery of tests, the results of which failed to reveal the presence of physical injury to her trigeminal nerve. However, her laboratory values revealed a slight increase in circulating antinuclear antibodies, so he referred her to a rheumatologist at Duke Rheumatology.

The rheumatology team suspected that she may have Hashimoto thyroiditis, which, given the proximity of the thyroid to the trigeminal nerve endings, could help explain her pain, Liedtke says.

“I suspected when she first came to see me that she might have a comorbidity that was worsening the pain,” he says. “And, as it turns out, there were not 1 but 4 factors co-contributing to her pain: the thyroiditis, the abscessed tooth, her stressful job, and her stage of life—premenopause can predispose some women to trigeminal nerve pain in cases where other injuries to the nerve co-contribute.”

Liedtke concluded that the patient would not benefit from an invasive operation targeting her trigeminal nerve; rather, her condition required customized medical attention and lifestyle changes, including an exercise regime based on mild but consistent cardiovascular training and a less-stressful job.

“She was perhaps initially hoping she’d be able to have an operation that would fix everything rapidly in 1 strike, so she could go back to her intensive care nursing job,” Liedtke says. “But we discussed how she could apply her broad spectrum of professional knowledge and skills to a stress-reduced, yet fulfilling job. Thanks to the multiple interventions, her stabbing, neuralgic pain is now gone, and she is on a path forward.”