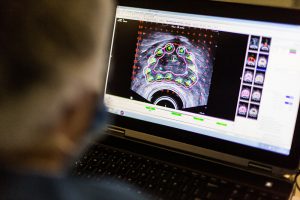 In an accompanying commentary piece, W. Robert Lee, MD, of Duke Health argues that the explanation for the seemingly contradictory results lies largely in the differing hypotheses of the 2 studies—noninferiority vs superiority—and the amount of radiation administered per fraction.

Despite the differing hypotheses, Lee notes that it is clear that the hypofractionation regimen used in the CHHiP trial has a rate of efficacy comparable to the conventional approach. However, he agrees with the HYPRO researchers that the higher-dose fractions used in their study should not be adopted—primarily because of the increased rates of toxicity.

“Based on the results of these studies, radiation oncologists now have evidence to offer a shorter course, making treatment more convenient for patients and their families,” Lee says.

“The CHHiP trial and a previously published NRG Oncology trial have demonstrated that moderate hypofractionation (daily dose of 2.5-3.0 Gy over 4-5 weeks) is safe and effective,” he adds. “In the next few years, we need to test whether extreme hypofractionation schedules (4-5 fractions in 1-2 weeks) are as effective as more extended schedules.”