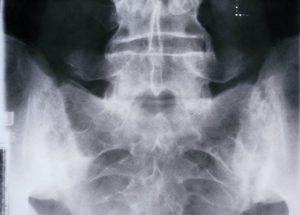 New guidelines for the treatment of ankylosing spondylitis (AS) and nonradiographic axial spondyloarthritis (SpA) from the American College of Rheumatology, Spondylitis Association of America, and Spondyloarthritis Research and Treatment Network were published in the February 2016 issue of Arthritis & Rheumatology.

The guidelines call for the use of nonsteroidal anti-inflammatory drugs (NSAIDs) as the initial treatment for AS and nonradiographic SpA, rather than slow-acting antirheumatic drugs or systemic glucocorticoids. For patients whose condition does not adequately respond to NSAIDs, tumor necrosis factor inhibitors, such as etanercept or adalimumab, are recommended. When patients are stable, NSAIDs should be continued to maintain disease control.

The recommendations also emphasize the importance of exercise as a valuable adjunct to AS management at every stage of the disease.

Nonradiographic axial AS, a recently classified condition, falls within the spectrum of AS but is distinguished from typical AS by the absence of definitive changes of sacroiliitis on plain radiographs and may be more difficult to diagnose.

In an accompanying editorial, E. William St. Clair, MD, chief of rheumatology and immunology at Duke and former president of the American College of Rheumatology, and his coauthor, William Taylor, PhD, write that the new recommendations “probably reflect current practice and contain few controversies,” but they also highlight the need for better ways to assess disease activity. Making the best treatment decision depends on a reliable assessment of disease activity, St. Clair says.

In the editorial, St. Clair and Taylor also challenge some recommendations largely based on expert opinion, owing to shortcomings in the available evidence.

Although St. Clair and Taylor welcome recommendations for axial SpA, they also express concerns about the definition of nonradiographic axial SpA and the treatment implications. Whether individuals have early AS or a different subtype of axial SpA with a different natural history requires further study.

St. Clair and Taylor also point out the limitations of rheumatology treatment because “they often are almost immediately out of date.” In addition, St. Clair and Taylor note the lack of recommendations concerning the newest targeted therapies directed at the interleukin-23/interleukin-17 axis—critical mediators of the inflammatory process.

“The ongoing challenges are to resolve the evidence gaps, to regularly update the recommendations as new evidence emerges, and to ensure efficient implementation of the guidelines into regular practice,” St. Clair and Taylor conclude.