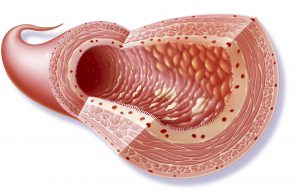 A 43-year-old woman consulted a gastroenterologist after she unintentionally lost 60 pounds and noticed gross hematochezia. She was also anemic and experiencing significant abdominal pain.

Colonoscopy revealed inflammation in the patient’s left colon, and she was diagnosed with left-sided Crohn disease. The gastroenterologist prescribed mesalamine.

For several years, the patient’s disease appeared to be under control. However, 3 years later, the abdominal pain and gross hematochezia returned, so another gastroenterologist started her on azathioprine. When the patient began to experience adverse effects related to the treatment, she was taken off the drug.

The patient was also diagnosed with perianal fistulae and was started on adalimumab. However, she soon developed neuropathy in her hands and feet, a rare but previously described neurologic adverse event.

She was then referred to Karen A. Chachu, MD, PhD, a Duke gastroenterologist specializing in inflammatory bowel disease.

Chachu discussed potential treatment options with the patient, and they decided she should try vedolizumab, an approved integrin receptor antagonist that, because of its gut selectivity, may have fewer adverse effects than drugs like infliximab and other tumor necrosis factor (TNF) blockers.

Initially, because of its slow-onset action, Chachu was unclear whether the patient would benefit from vedolizumab. Around the time she started the infusions, the patient developed a rectovaginal fistula. Following surgery to repair the fistula, the patient required an extended duration of antibiotics, including intravenous antibiotics, and later developed Clostridium difficile–associated diarrhea.

“There were points when the patient was really unsure of whether this was going to work out,” Chachu says. “But she is a positive person—I think that’s what got her to seek out other treatment opinions in the first place—and she has good support, which really helped her stick it out.”

The C difficile infection was successfully treated with vancomycin. Six months after starting vedolizumab infusions, the patient began to see positive results. Her abdominal pain and hematochezia resolved, and her fistulae healed.

Importantly, with her disease finally in clinical remission, she feels well and is back to work and doing the things she enjoys.

“The treatment’s not perfect,” says Chachu. “She’s developed recurrence of Crohn disease–associated arthropathy in her hands that we’re still thinking through how to address because vedolizumab’s selectivity for the intestinal tract means it does not treat many extraintestinal manifestations of Crohn disease. But, I think we’ve done really well for her in many respects.”

Chachu says the future of care looks bright for patients with Crohn disease. “One of the great things about taking care of these patients now is that the number of treatment options has really expanded. Within the anti-TNF family alone, which is over a decade old, there are a couple of different drugs. Now we have this new drug, which has really changed the life of some patients and helped get them back to doing what they love.”