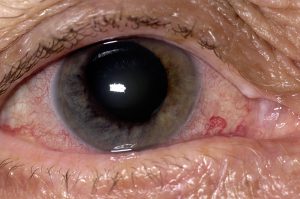 A 63-year-old woman with nanophthalmos consulted her local ophthalmologist when she began experiencing eye pain and blurred vision. The ophthalmologist diagnosed her with angle-closure glaucoma and performed laser iridotomy to attempt to reduce her intraocular pressure (IOP) and preserve her vision.

However, because of her shortened axial length—17.6 mm in her right eye and 17.48 mm in her left—the procedure was unsuccessful; her IOP spiked, and her vision began to rapidly deteriorate.

The ophthalmologist prescribed several glaucoma medications, but her IOP remained high, so he referred her to the Duke Eye Center. At Duke, she was also diagnosed with cataracts that would require surgery.

Question: In what ways does nanophthalmos make surgery more difficult, and how can these complications be addressed?

Answer: Nanophthalmos increases the risk of serious surgical complications such as choroidal effusions and malignant glaucoma. To minimize risk to the patient, Duke ophthalmologist Pratap Challa, MD, performed cataract surgery combined with posterior capsulotomy and vitrectomy. He then trimmed and implanted a shortened tube shunt into the patient’s sulcus to control her IOP.

When the patient arrived at Duke, she already had advanced glaucoma: The IOP in her right eye was 28 mm Hg, her visual field was restricted, and she had advanced cupping of her right optic nerve (cup-to-disc ratio, 0.95). It was important to intervene quickly to control her IOP to prevent vision loss in her right eye, Challa says.

He needed to proceed with care, however, given the risks of performing ophthalmic surgery in a patient with nanophthalmos. For example, in addition to the risk of effusion and malignant glaucoma, the shallow depth of the anterior chamber of her eyes would make it more difficult to safely perform cataract removal.

Furthermore, Challa would need to carefully ensure that the plate of the tube shunt he implanted did not hit her optic nerve and potentially impair her vision. This required that he measure her axial length and trim the plate before implantation. He also implanted the tube into the sulcus rather than the anterior chamber because of the lack of space in the anterior chamber.

Following the series of same-day procedures, the patient did quite well, Challa reports, and he performed the same set of surgeries on her left eye after that eye’s IOP began to increase. Since then, her IOP has remained low and her vision has improved.

“Shorter eyes present a unique set of challenges to surgery,” Challa remarks. “Fortunately, we now have very safe techniques to address them.”