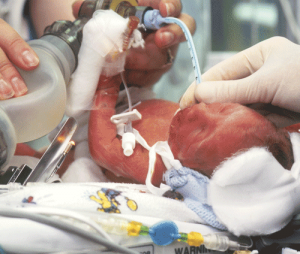 In December 2014, a male infant was born at a hospital in Wilmington, North Carolina, at 30 weeks of gestation and weighed approximately 3 pounds. Following the delivery, the infant became ill and was in respiratory distress. The infant also had a small hemorrhage and fluid had begun to collect in his brain.

His health care team initially attributed the respiratory problems to the premature birth.

Echocardiography was obtained, which is standard care for premature infants whose lungs are compromised, and the results demonstrated a cardiovascular anomaly.

The patient was then referred to the intensive care nursery at Duke Children’s Hospital, where the pediatric cardiology team confirmed that the respiratory distress was due to total anomalous pulmonary venous drainage, a congenital heart condition in which veins normally connected from the lungs to the left atrium of the heart are actually not attached to the heart at all.

Question: Because of the infant’s small size, surgery to repair his heart was not an immediate solution. What course of treatment was pursued?

Answer: The multidisciplinary care team at Duke came together to determine an alternative to temporarily alleviate the infant’s respiratory distress until he could safely undergo open-heart surgery. Pediatric cardiac interventionalists Gregory A. Fleming, MD, MSCI, and Kevin D. Hill, MD, MS, performed a cardiac catheterization procedure, placing a stent in the obstructed portion of the venous drainage.

“There is no way for blood to get from the lungs directly to the heart, so it goes in a circuitous fashion. However, in this case,” explains Robert D.B. “Jake” Jaquiss, MD, chief of pediatric cardiothoracic surgery at Duke, “not only was there this abnormal pathway, but the alternate path was also obstructed.”

Jaquiss says that performing a cardiac catheterization procedure on such a small infant is a rare and remarkable feat. “This was one of the youngest and smallest patients ever to undergo this type of procedure.”

After the stent was implanted, the infant’s lung function significantly improved. According to Jaquiss, the care the patient received before and after the stent procedure played a significant role in his progress.

“Small infants typically have many immature organs, and among the most vulnerable are the lungs,” he explains. “This infant was kept alive in part because of the superb intensive care team led by Ronald Goldberg, MD.” He says that a key component was appropriately utilizing very gentle ventilatory support without causing additional damage to the compromised lungs.

Meticulous attention to nutritional support and infection prevention were also vital. “The status of the small fluid collection in the brain was also monitored closely,” Jaquiss notes.

Six weeks after the initial catheterization procedure, the infant outgrew the original stent and required another implanted stent to further enlarge the area. The patient continued to improve and then outgrew that stent as well. Then, at approximately 11 weeks of age, he became eligible for open-heart surgery.

“The surgical procedure was the simplest part of this infant’s care,” says Jaquiss, who performed the surgery. “The veins from the lungs came together in one location, adjacent but not connected to the heart.” He explains that he opened the veins and the adjacent left atrial chamber of the heart and attached them, thus establishing a normal pathway for blood to travel from the lungs to the heart.

The patient tolerated the surgery very well despite the potential for injury from the heart-lung machine. Two weeks later, he was strong enough to undergo a neurosurgical procedure performed by Eric M. Thompson, MD, a pediatric neurosurgeon at Duke. Thompson inserted a ventriculoperitoneal shunt to treat a small collection of fluid in his brain, removing and replacing the temporary drainage system that had been placed previously.

The infant was discharged from the hospital a little more than 1 month following the surgery. “He left the hospital in a car seat with his family and required no home care,” says Jaquiss.

He was also enrolled in the Special Infant Care Clinic, which was developed by Ricki Goldstein, MD, located at the Lenox Baker Children’s Hospital at Duke, where he receives ongoing and comprehensive follow-up care from a variety of specialists.

“The Special Infant Care Clinic was developed to care for children like this who have complex medical histories,” Jaquiss explains. “The parents receive assistance and coordinating appointments with multiple specialists in a single visit.”

At 6 months of age, the baby weighed 12 pounds. Although he remains small for his age, his heart has made a full recovery.

“He is doing very well overall,” adds pediatric cardiologist Michael G.W. Camitta, MD. “He had a near perfect result from surgery without any residual pulmonary venous obstruction. His heart size and function are normal. At this point, his heart is working completely normally with no residual issues from the defect.”