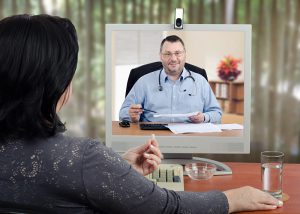 In 2001, when Medicare began covering telemedicine services, the federal government estimated the program would cost $30 million per year over the first 5 years (for a total of $150 million) and would likely become more expensive after that. Now, 17 years later, telemedicine has never once cracked the $30-million-a-year mark, and it also has not even reached the original $150 million estimate.

Why? Mostly because regulatory restrictions limit the number of patients and services covered, according to Nathaniel Lacktman, an attorney with the law firm Foley & Lardner, who specializes in telehealth and chairs the firm’s national telemedicine industry team. A key factor is that Medicare patients must travel to “qualified originating sites,” such as physician offices and designated health clinics. Additionally, reimbursement is limited to patients located in rural and certain nonurban zones.

Private insurance carriers, on the other hand, worry that the increased convenience of telehealth tools will lead to increased patient utilization, thereby increasing their costs. Thus far, the literature has been inconclusive. A 2017 study found that the cost of follow-up visits for telehealth patients who sought care for acute respiratory problems was higher than for patients whose visits originated in a doctor’s office. Conversely, a 2016 review study by the federal government found that telehealth and remote patient monitoring among patients with chronic conditions improved outcomes and reduced rates of hospital admissions.

For many telehealth supporters, the question is not how many health care dollars can be saved but rather, how many dollars can be saved by society as a whole. However, Lacktman cautions, “cost savings should not necessarily be the paramount decisive factor when you are talking about someone’s medical needs. Quality and access to care are essential to managing the health of a population.”

Increasing Access to Telemedicine
Several forces are aligning to help make telemedicine more accessible to patients and health care professionals. In both the 21st Century Cures Act, signed into law during the final days of the Obama administration, and the Medicare Access and CHIP Reauthorization Act (MACRA), Congress requires government agencies to study the prevalence of telemedicine and suggest ways it might be encouraged.

Telemedicine appears to enjoy bipartisan support; Congress has several pending bills aimed at enhancing telehealth utilization. “There are at least 6 federal bills that would materially expand Medicare coverage of telemedicine,” says Lacktman, adding that he is optimistic that at least 1 will become law. For instance, 1 bill introduced in mid 2017 would allow the Centers for Medicare & Medicaid Services to waive restrictions on telehealth services that have a proven record of reducing wasteful spending or improving patient outcomes.

Opportunities for Peer-to-Peer Interaction
We tend to think of telemedicine in terms of an at-home patient with a medical need consulting a physician via video conferencing technology, but even more opportunity may exist for peer-to-peer medical communications, particularly among specialists. “Unlike a lot of programs, we’ve not been focused as much on consumers as they relate to primary care,” says Cho regarding Duke’s telehealth efforts. “We’ve started with our specialists.”

For example, in the Duke program for musculoskeletal telemedicine, when a primary care physician sees a patient with arthritis who may be a candidate for joint replacement, rather than only referring the patient to an orthopaedic surgeon, the primary care physician first performs an e-consult. This improves the surgeon’s visit-to-surgery ratio while also providing more complete, thorough information in the event the face-to-face consultation occurs. Furthermore, this process helps encourage nonsurgical patients to visit a rheumatologist faster.

Forward Thinking
Although much enthusiasm surrounds telemedicine, even the most optimistic advocates concede that we are at least several years away from large-scale adoption. But forward-thinking physicians who wish to offer telehealth to patients right now have several options, according to Lacktman.

For instance, they can reach out to the medical directors of their commercial plans and negotiate contracts to cover telehealth services for members. It can be as simple as a brief addendum to their health plan participation agreements. Lacktman has helped clients craft such addenda, which usually stipulate a trial period. “Most health plans can terminate a participating agreement without cause on a 60-day notice anyhow, so this entails very little risk for them,” he notes.

The most difficult part is finding willing physicians, many of whom may doubt telehealth can ever be compensated. However, he notes, “a lot of forward-thinking providers who have the ambition and the vision to engage the health plans in a meaningful way are successful at it.”