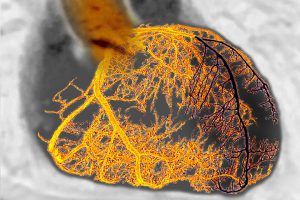 Damage caused by myocardial infarction (MI) can be limited by standardizing emergency responses and hospital treatments to reduce the time from initial medical contact to blockage clearing, according to a national study published August 1, 2016, in Circulation.

Previous research has shown that patients treated within the guidelines have higher survival rates. However, up to 50% of patients do not meet STEMI guideline goals.

“The single most important way to prevent death in the case of heart attack is to rapidly open the blood vessel so that blood flow is restored,” says the study’s senior author, Duke cardiologist Christopher B. Granger, MD. “This is one of the most important things we can do in all of cardiovascular care.”

Coordinated efforts during the study produced a modest but statistically significant increase in the proportion of patients treated within guideline goals:

In addition, 5 of the 16 regions that stood out as the most improved experienced an increase from 45% to 57% in the proportion of patients meeting the 90-minute guideline when transported by EMS. The most successful region treated 76% of its patients within guideline goals by the end of the project.

“For the first time in many of these regions, this project has provided a framework for bringing together groups that are critically important to providing the best emergency care,” Granger says. “Even though the effect was modest overall, we proved that it is possible to significantly change care, and, if these results are leveraged and optimized over years of effort, there could be even more benefit.”