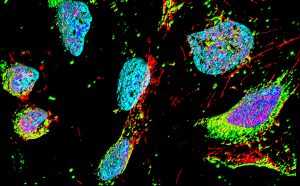 New technology developed by Duke researchers promises to transform the way cervical cancer screening is performed. Whereas screening has historically required highly trained professionals and expensive diagnostic tools that are not widely available and a speculum-based technique that can involve significant patient discomfort, the new device is small, relatively inexpensive, easy to use, and could allow for self-screening.

The investigators hope the new method will make cervical cancer screening more accessible, particularly for women in low- and middle-income countries, where cervical cancer is the second most common cancer among women.

“Our goal in developing a speculum-free colposcope was to not only focus on cost and accessibility but also patient experience, which, in reality, sometimes does not play as central of a role as it should,” says the study’s senior author, Nimmi Ramunujam, PhD, a biomedical engineer at Duke.

To identify a speculum alternative, the investigators tested 4 designs to be used in conjunction with a previously described, clinically validated, pen-sized, point-of-care tampon colposcope. Based on modeling with computer-aided design software and a custom-made vaginal phantom, a curved tip inserter was selected and then tested in conjunction with a simple, 2-megapixel camera on 15 healthy volunteers.

The volunteers were trained to use the inserter before inserting the device and using the camera to obtain images. They were also asked to complete pre- and post-examination questionnaires. Results of the study were published in PLOS ONE on May 31, 2017.

Overall, the volunteers were able to use the device for cervix visualization and imaging (83%). Although the majority of the volunteers in the study did not consider the speculum to be a barrier to screening, almost all (92.3%) reported preferring the inserter to a speculum, and all indicated that the inserter was a more comfortable alternative.

The new inserter is not without limitations, the researchers caution. For example, the new device cannot always be used to visualize the squamocolumnar junction. However, current methods of visually inspecting the cervix have the same limitation, indicating that pathology remains the gold standard, and biopsy should be performed when available.

“This technology potentially makes screening exams more comfortable, which in turn may decrease fear of the procedure as one barrier to cervical cancer screening,” says Duke professor of obstetrics and gynecology John Schmitt, MD, who also worked on the project. “While the vaginal inserter is more comfortable than a traditional speculum in terms of ease of insertion, work still needs to be done to allow for the application of solutions for better visualization and the ability to obtain samples when needed.

Still, the researchers conclude, adoption of a new, more accessible method of screening could help drive down global rates of cervical cancer and may even be useful for additional gynecologic applications such as Papanicolaou smears, human papillomavirus testing, and in the diagnosis of various infections such as vaginitis and cervicitis.