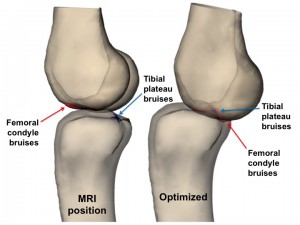 What causes an anterior cruciate ligament (ACL) tear? Is it the torque of a twist on impact, an extended, straight leg on impact, or some other force?

The answer is important in terms of the potential for prevention, because the injury ages knees by about 30 years, says Lou DeFrate, ScD, an engineer and researcher for the Duke Department of Orthopaedic Surgery.

The Duke investigators, DeFrate and knee surgeon William Garrett, MD, used magnetic resonance imaging (MRI) to visualize patient knees within 1 month of injury and then created 3-dimensional (3D) images that could be rotated to align bones to show where they were at the moment of injury.

Using a “forensic biomechanics” approach to line up the bone bruises that accompany ACL injuries, Duke researchers showed which motions caused the injury. The results appear in a study published in the October 2015 issue of the American Journal of Sports Medicine.

Injury to the ACL leaves a “bruise” on the tibia and femur visible on MRI.

“We wrote some simple computer code to create a 3D model of the knee and then moved the knee around in space until the bruises on both bones (the tibia and femur) matched up,” DeFrate says. “This tells us what position the knee was in at the time of injury.”

The researchers discovered that the flexion angle of the knee was near full extension in all 8 patients studied with ACL injuries. The amount of valgus collapse, which was historically thought to be the mechanism of injury, was minimal.

Laboratory studies were made based on the results obtained from MRI. The outer margins of bone and bone-bruised surfaces were outlined on each study patient's MRI results to create a 3D knee model (Figure 1). The researchers used numeric optimization to maximize the bone bruises on the femur and tibia to predict the position of the injury.

They measured knee flexion angle, valgus orientation, internal tibial rotation, and anterior tibial translation on both the positioning seen on MRI and the predicted positioning, created by aligning the bruises on each virtual 3D bone image.

Watching videos of an athlete as the injury occurs provides limited information, explains DeFrate. “The findings of this study are important because we cannot prevent injuries if we don’t know the dangerous position the knee was in at the time of injury.”

He stresses that the injury is most common in people aged 15 to 25 years who cannot afford to have a knee that ages by decades in a single instant.

DeFrate says that prevention may be possible. With this new research, it could be possible to train athletes to land and move in other ways to avoid landing in extension, which, he says, could put the ACL at high risk for injury.