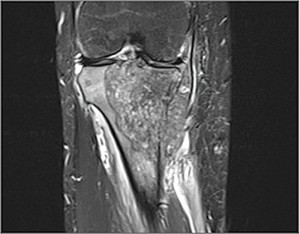 A 37-year-old American woman who served in a community in Senegal with her husband and children was having unusual leg and knee pain. She attributed the pain to previous injuries until she needed relief and visited a doctor. Radiographs were obtained in Senegal and revealed a growth in her right proximal tibia.

Upon her return to North Carolina in February 2014, she was immediately seen by sarcoma specialists at Duke and another round of x-rays was obtained. Radiologists found a mass on the x-rays concerning for cancer as well as a fracture of the knee joint. Biopsy was performed within 24 hours of her arrival at Duke and revealed cells consistent with a small, round, blue cell tumor. Lymphoma was ruled out.

Question: What was the patient's diagnosis, and what treatment options were offered to her?


Answer: The specialists at Duke diagnosed the patient with Ewing sarcoma, which was confirmed with fluorescence in situ hybridization. She received induction chemotherapy and underwent limb-salvage surgery.

Ewing sarcoma is a relatively rare tumor most often seen in the extremities of children. No metastases were present. The patient’s age and the position of her tumor at the knee made her treatment challenging.

Forty years ago, the treatment of choice for Ewing sarcoma was amputation, and many patients died of metastatic cancer. Over the years, treatment has improved and now involves induction chemotherapy (≤ 5 agents) to shrink the tumor, followed by surgery and consolidation chemotherapy; radiation may also be necessary.

At the time of her first appointment, the mass in the proximal tibia measured 7.9 × 7.2 × 5.6 cm (Figure 1, left), so the patient began 3 months of multiagent induction chemotherapy. This regimen consisted of alternating cycles of vincristine, doxorubicin, and cyclophosphamide with ifosfamide and etoposide, administered before surgery.

Induction chemotherapy resulted in a marked interval decrease in the size of the soft-tissue component of her disease and a decrease in marrow edema. Imaging revealed evidence of this response, with the tumor shrinking to 8.0 × 5.5 × 4.9 cm (Figure 1, right).

After discussing surgical alternatives (including possible amputation), limb-salvage surgery was performed by removing the tumor and reconstructing the defect (Figure 2). Brian Brigman, MD, PhD, an orthopaedic oncologist and director of the Duke Sarcoma Program, conducted the resection, which involved removing part of the proximal tibia and replacing it with an artificial knee as well as providing coverage with a muscle flap and skin graft. 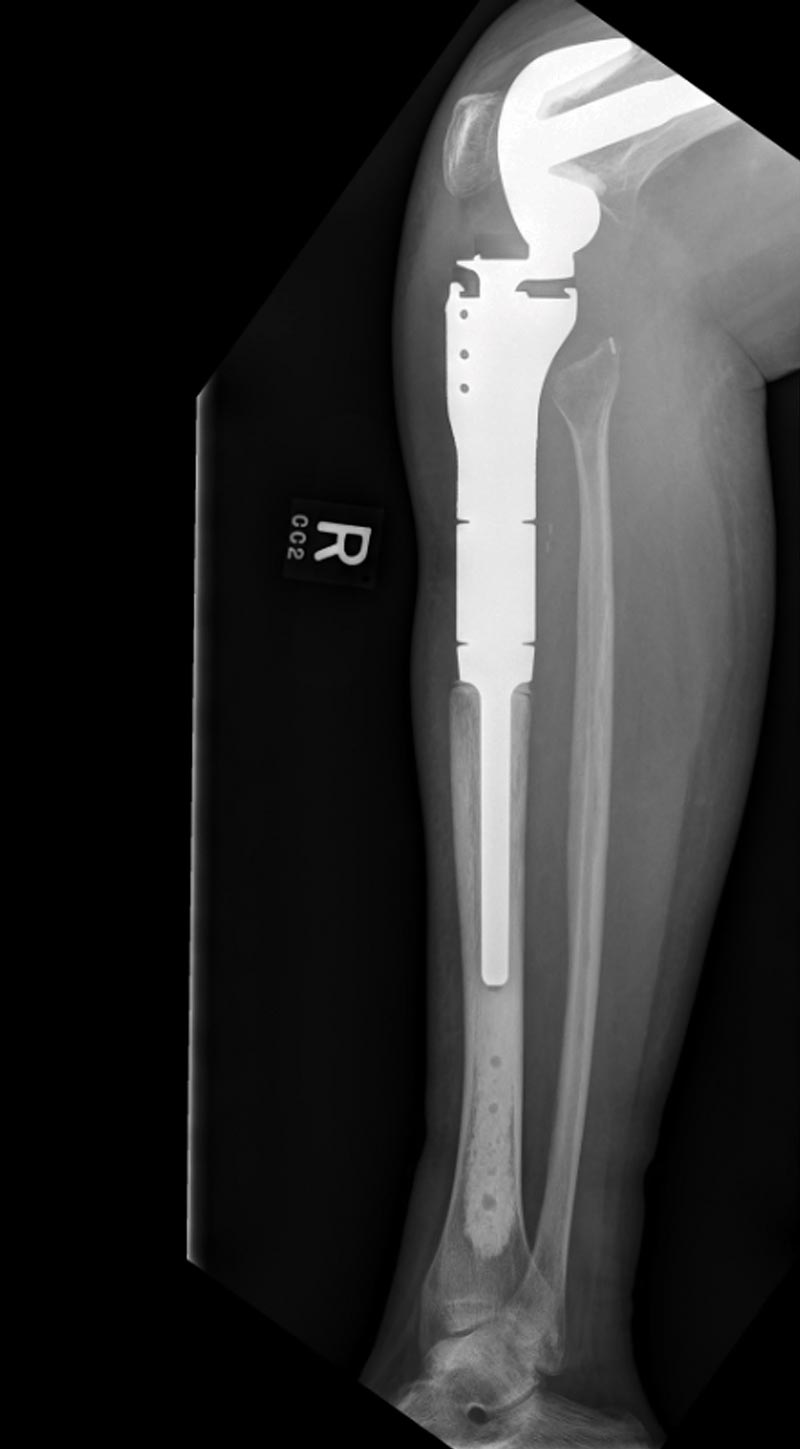 “This patient was a candidate for radiotherapy, which we routinely suggest for a higher-grade tumor or if the tumor is larger than average,” explains Nicole Larrier, MD, a pediatric radiation oncologist who treated the patient’s tumor.

After surgery and radiotherapy, the patient resumed chemotherapy to complete a total of 17 chemotherapy cycles during a 1-year period. The patient began exercises that gradually bent her knee more fully, and, within a few weeks, she could walk without a walker or other form of assistance.

To date, she has no evidence of metastatic disease. The patient will follow up quarterly after chemotherapy for evaluation, with attention to her leg and lungs, Brigman says.

Patients often become aware of sarcomas after seeking treatment for incidental injury or pain that they attribute to other activities, such as exercise. Pain due to sarcoma does not typically improve with time, and patients may have significant swelling.

Any tumor larger than 5 cm that is deep in the fascia is worth referring to a sarcoma center, Brigman says. If a rapidly growing mass is observed, then imaging should be promptly obtained, and, if findings raise concerns, then referral to a sarcoma service is warranted.

“One thing that cannot be overemphasized is the fact that, if there is any suspicion of sarcoma whatsoever, patients are best served in centers with multidisciplinary expertise,” says oncologist and sarcoma specialist Richard Riedel, MD.