A man in his 60s had few remaining options after a long history of lumbar spine degenerative disease. He experienced little relief from his back and leg pain after conservative therapies including physical therapy and methyl-prednisone injections. But he feared a spinal fusion would interfere with an active lifestyle that included motorcycle riding.

When he presented to Duke neurosurgeon Anna R. Terry, MD, MPH, his condition had progressed to lumbar stenosis and degenerative scoliosis. After reviewing the options with the patient, Terry performed an L2 to L5 laminectomy that provided the patient brief relief and enabled him to return to his usual activities after physical therapy. However,  just six months later, the patient’s pain had recurred and his had posture worsened; imaging studies revealed that his scoliosis curve had increased, affecting his nerves..

Pre-operative imaging studies, such as a CT scan, are merged with real-time images on the operating table to enable the surgeon to plan incisions and trajectories and precisely place hardware. A reference frame is attached to the patient (typically to the iliac crest) and the C-arm. A robotic arm holds and helps guide the instruments through small incisions, avoiding the need for a large midline incision through the musculature.

“The advantages of a minimally invasive approach are less tissue dissection; smaller incisions, which mean less chance of infection; a shorter hospital stay; and better pain control for the patient,” Terry says.

Terry says that because the fusion needed to extend from L2 to L5, this patient was a good candidate for the use of robotic navigation to assist in placing the screws, which makes that part of the procedure more accurate and efficient.

“We can navigate in the ideal position for creating the entry points and place the screws along that same trajectory with minimal error,” Terry says. “We don’t have to take multiple passes through the tissue to get the right pathway because it is done through software navigation.”

“I have been using the technology regularly and have treated many patients using robotic-guided screw placement through various modalities,” Horne says.

Despite the initial concerns of Terry’s patient about undergoing a spinal fusion, he “is several months out from surgery and doing really well,” Terry says. “He is now able to stand up straight, with no leg pain and minimal back pain. He has already been on several long bike rides and is gradually returning to his active lifestyle.” 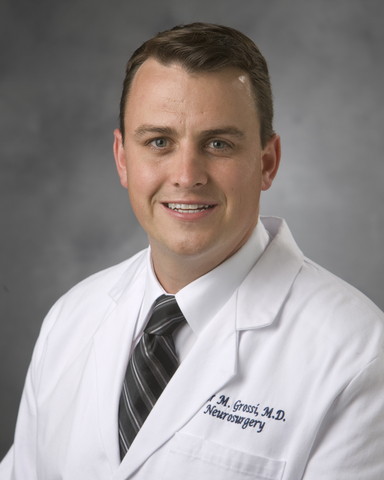