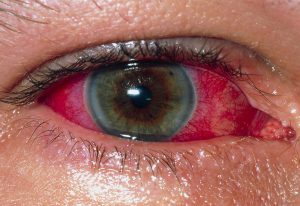 Patients with noninfectious uveitis can be effectively treated with adalimumab, according to results of the Efficacy and Safety of Adalimumab in Patients With Active Uveitis (VISUAL I) trial published in the September 8, 2016, issue of the New England Journal of Medicine.

Earlier in 2016, results from the VISUAL I and Efficacy and Safety of Adalimumab in Subjects With Inactive Uveitis (VISUAL II) trials led to the approval of adalimumab by the US Food and Drug Administration (FDA) for the treatment of noninfectious panuveitis, intermediate uveitis, and posterior uveitis in adults. Previously approved for the treatment of arthritis and Crohn disease, among other indications, the drug offers an alternative to corticosteroids, traditionally the only FDA-approved treatment for uveitis.

“Patients with uveitis may have many unwanted side effects when taking long-term steroids,” says Glenn Jaffe, MD, lead investigator of the VISUAL I trial and chief of the retina division at the Duke Eye Center. “The goal of these studies was to determine whether there was an alternative that could replace or minimize the use of steroids. The studies also looked at whether an alternative would be better tolerated or more effective, yet still safe.”

The VISUAL I study consisted of 217 adults with active noninfectious panuveitis, intermediate uveitis, or posterior uveitis. Participants were randomly assigned to receive either adalimumab or placebo at the start of the trial and every 2 weeks thereafter. All participants also initially received standard doses of prednisone and continued to receive it in diminishing doses for 15 weeks.

Jaffe and colleagues then analyzed study participant time to treatment failure, or how soon they saw a recurrence or worsening of 1 or more of 4 signs of inflammation: new inflammatory lesions, best corrected visual acuity, anterior chamber cell grade, and vitreous haze grade.

“It is the active inflammation that can potentially permanently decrease the patient’s vision and cause unwanted symptoms, such as eye pain and floaters in the field of vision,” Jaffe explains. “The hope is that by delaying or eliminating recurrences, patients’ vision can be preserved, and the symptoms will be minimized or eliminated.”

The researchers found that those assigned to the adalimumab group had a greater median time to treatment failure and were significantly less likely to experience treatment failure than those in the placebo group.

“One unique aspect of this study is that the end point we used—time to failure—was composite, meaning it was based on more than 1 sign of inflammation,” Jaffe says. “It’s a good approach because it captures multiple possible ways people can have worsening of the disease. We expect to see more investigators using a composite end point approach in the future.”