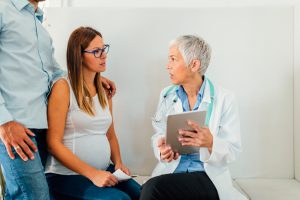 In an article published in October 2017 in the American Journal of Obstetrics & Gynecology, researchers share new prognostic models for estimating risks of pelvic floor disorders 12 and 20 years after delivery. The models may provide an opportunity before birth to implement prevention strategies, such as pelvic floor muscle training, weight control, or elective cesarean section, for women at higher risk of developing pelvic floor disorders—a condition that is present in more than one-third of women in the United States and causes symptoms in nearly one-quarter.

“The real obstacle when thinking about how to prevent pelvic floor disorders in women is that they develop these conditions years—sometimes decades—after childbirth,” says the article’s lead author, Eric Jelovsek, MD, MMEd, the director of Data Science for Women’s Health in Duke’s Department of Obstetrics and Gynecology.

“Properly identifying women who are at risk for developing pelvic floor disorders and counseling them around the time of childbirth to help them make an informed decision regarding their healthcare directly related to the event of childbirth itself has been a real challenge in our field."

To develop the models, the researchers collected information from 2 large datasets: the first from the Swedish Medical Birth Register, led by a team at the University of Gothenburg, Sweden, and the second from a large cohort study conducted by investigators at Glasgow Caledonian University and the University of Birmingham in the United Kingdom and University of Otago in New Zealand.

“This is an example of international collaboration at its finest,” says Jelovsek. “We combined our expertise in building prediction models with both of these large datasets to essentially fit models that we think accurately predict these outcomes.”

The ability to predict a woman’s risk of developing a pelvic floor disorder is a valuable tool, Jelovsek says. In particular, reassuring women about being low risk is very important because most women want to have a vaginal delivery and want to understand the long-term risks to their pelvic floor. More personalized data allows women to make better informed decisions.

According to Jelovsek, there is also an opportunity for qualitative work around providing predictions to providers and patients in the context of childbirth and in seeing how they interpret them.

“Asking patients and providers whether this information is valuable, whether it is helpful, does it change their mind and reassure them that the decisions they are making are useful, is key,” Jelovsek says. “Simply building the model and saying that it performs accurately doesn’t actually change practice. We need to study how the use of the model might begin to alter the providers’ and patients’ perceptions of their risk of developing pelvic floor disorders down the line.”