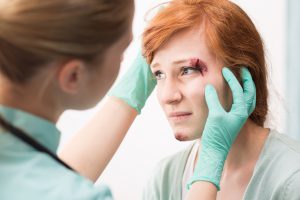 The global statistics are similarly astounding. The International Labour Organization estimates that there are 20.9 million victims of human trafficking globally, but that number cannot be accurately verified. “We don’t know how extensive it is, but we know it is occurring in many communities, including in the United States,” says Sara Katsanis, an instructor in the Duke Initiative for Science & Society who is researching the applications of kinship analyses to identify victims of human trafficking.

Victims are typically isolated and have limited contact with people who can help them, but many seek medical treatment in emergency departments, clinics, and doctor’s offices. Indeed, nearly 88% of sex trafficking victims had contact with a health care professional at some point while being held against their will, according to a 2014 report in the Annals of Health Law. By becoming more aware about human trafficking, implementing key indicators to identify possible victims, and receiving training, clinicians can connect patients with the support and services they require to escape the realm of human trafficking.

Awareness
Although global awareness of human trafficking has increased, further work is needed. The current challenge of promoting widespread victim identification is similar to the efforts by the physicians and researchers who brought awareness to child abuse and neglect in the 1960s.

“Just like we care about child abuse, we should care about this issue and the health of those patients,” says Wendy L. Macias-Konstantopoulos, MD, the founding director of the Human Trafficking Initiative at Massachusetts General Hospital and an assistant professor of emergency medicine at Harvard Medical School.

“We need people who understand the complexities of the issue and who can participate in the process of providing care for these patients,” Macias-Konstantopoulos adds. “As we develop an understanding of just how large the problem is, we can then make a case for needing resources, establishing those resources, and making those resources available.”

Indicators
Health care professionals have a unique opportunity to connect with human trafficking victims and provide them with support and services. Although no validated screening tools for the health care setting are currently available, the National Human Trafficking Resource Center provides a list of general indicators of human trafficking.

Appearing to be under the control of someone else is one of the main indicators that a patient could be a potential trafficking victim. In sex trafficking cases, the most suggestive physical symptoms are injuries from physical violence, along with any signs of forced sex and facial injuries. Although these may also be signs of domestic violence, their presence in patients seeking multiple abortions or treatment for sexually transmitted infections may help health care professionals distinguish possible sex trafficking situations. The combination of these symptoms should also arouse suspicion when an older or controlling figure is present.

Additionally, requests for contraception by noticeably young girls who show signs of injury or abuse could be viable warning signals. Ultimately, providers can play a key role in preventing long-term health issues in this population.

Training
Health care professionals are likely seeing trafficking victims but may not be equipped with the necessary training to identify and respond to their needs. A 2014 study in the Journal of Health Care for the Poor and Underserved found that 95% of emergency medicine professionals never received formal training on the appropriate treatment of these patients.

Lack of formal training, however, should not prevent clinicians from engaging with potential trafficking victims. Above all, patient safety is imperative. “The most important thing to know is not to do any screening in front of anyone who is accompanying the victim or potential victim because it could place the patient in greater danger,” cautions Noga Zerubavel, PhD, a Duke assistant professor in the Department of Psychiatry and Behavioral Sciences and director of the Duke Stress Trauma and Recovery Treatment Clinic.

According to the National Human Trafficking Resource Center guidelines, the goal of the interaction should not be disclosure or rescue; rather, it should be the creation of a safe, nonjudgmental place that can help providers identify trafficking indicators and assist the patient as needed. If deemed appropriate, consider asking about a patient’s living conditions.

Human trafficking is a public health problem, similar to child abuse and intimate partner violence. “The relevance of [human trafficking] in medicine is often overlooked,” Macias-Konstantopoulos explains. “Violence has significant, serious implications for the health and well-being of communities. It’s not something we can brush under the rug.”