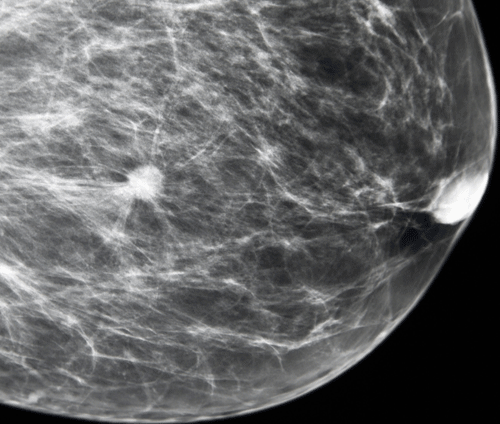 A 34-year-old woman presented to her health care professional because she felt a lump in her breast. She was otherwise healthy and had no family history of cancer. After obtaining mammography and ultrasonography, she was told she had nothing more than a cyst. Over the next several months to a year, she became concerned that the lump was growing.

The patient presented at Duke Medicine and was seen by Lisa Tolnitch, MD. When new findings on mammography and ultrasonography showed a 4-cm mass, biopsy was performed and revealed breast cancer.

Question: How does this patient's case reflect changes in the patterns of occurrence that practitioners are seeing?

Answer: Clinical experience and national data indicate that the number of young women experiencing breast cancer is increasing, so this case illustrates the need for vigilance at any age.

When this patient reported to her health care professional that she had found a lump, the clinician ordered the correct imaging tests, but those test results should have been more aggressively followed-up to determine the nature of the mass the tests revealed, Tolnitch says.

The patient’s young age may have contributed to the failure to aggressively follow-up, she suggests. Over the years since she started practicing, Tolnitch says that she has seen breast cancer appear in more women at younger ages. “We see plenty of women in their mid-thirties who have breast cancer. So, any woman who has a mass—and, in particular, a mass that changes over time—needs to be taken seriously, no matter her age.”

She had lymph node evaluation, and the sentinel nodes on the side of the tumor were clear. The tumor had a very low score on the Oncotype DX test, which is a genetic test that indicates the risk of recurrence. With these reassuring results, she did not need chemotherapy or radiation, but she did receive hormone therapy. To prevent any likelihood of recurrence, she opted to have bilateral mastectomies and reconstructive surgery, a decision that Tolnitch says was affected by the patient’s age.

“What started out as a scary thing—a growing mass and cancer in a young woman—ended up not being as bad as it could have been,” adds Tolnitch. “The lesson here is that you must take people seriously.”