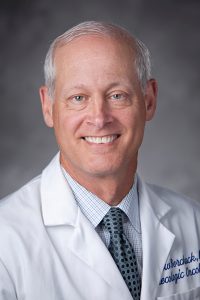 Director of the Duke Division of Gynecologic Oncology, Andrew Berchuck, MD, has a clinical focus on the management of ovarian, endometrial, and lower genital tract cancers. In October 2017, he published a commentary in the Journal of Clinical Oncology, arguing against a one-size-fits-all approach to treating patients with ovarian cancer with maintenance poly(ADP-ribose)polymerase (PARP) inhibitors. Here, he provides additional thoughts and offers some considerations for clinicians.

What have we learned about PARP inhibitors and who they are most effective in?
PARP inhibitor drugs have been approved by the FDA for all patients with recurrent ovarian cancer who have had a partial or complete response to platinum-based chemotherapy. However, we’ve learned that they work best for patients with BRCA1/2 mutations, are fairly effective in those with cancers that have homologous recombination deficiency (HRD), and are least effective in patients who lack either a BRCA mutation or HRD. In clinical practice, only about 20% of patients have mutations, and 25% have HRD. That means that as many as one-half of patients with ovarian cancer won’t see as much benefit from these drugs. In view of this, it seems sensible to use companion diagnostic tests that identify BRCA1/2 mutations and HRD to guide precision cancer therapy with PARP inhibitors.

What do clinicians need to consider before treating a patient with a PARP inhibitor?
For patients with BRCA mutations, PARP inhibitors can offer a significant prolongation of disease-free interval—delaying recurrence by almost a year is certainly a significant advance. But these patients tend to be more responsive to all types of therapies, whereas other patient populations don’t have many options. Trials have shown a small improvement in progression free survival for patients without BRCA mutations or HRD, but these drugs do not result in permanent cures. And the cost of about $14,000 a month is a concern in this era of skyrocketing medical costs when we should be striving to provide the best value-based care.

What are the next steps for improving treatment with PARP inhibitors?
We need to determine the best approach to administering PARP inhibitors. For example, do we begin to incorporate them into first-line therapies? As I mentioned, PARP inhibitors are active drugs, they delay recurrence, but they don’t seem to cure people. So should we use them in combination with other types of treatment like immuno-oncology drugs? We also need to better understand mechanisms of resistance to PARP inhibitors so that this can be circumvented. Hopefully, we are moving toward precision oncology, tailoring the best treatments to each patient with ovarian cancer.