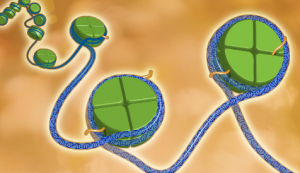 Susan Murphy, PhD, was appointed chief of Duke’s new Division of Reproductive Sciences in late 2017. She is internationally recognized for her research on the role of epigenetics in the development of gynecologic malignancies and developmental programming.

Question: Why study the epigenetic effects of in utero exposures on developmental programming?
Murphy: The DNA methylation contributed by the sperm and egg is reprogrammed right after fertilization. But methylation at imprinted regions, which are regulated by an unusual form of gene regulation that results in parent-of-origin expression of only one of the two inherited copies of that gene, is established in the gametes and must resist this reprogramming. We hypothesized that this period of reprogramming would be a vulnerable time for imprinted genes to maintain their methylation because the rest of the epigenetic information throughout the genome is being erased and reestablished. As such, the endogenous and exogenous environment has the potential to alter the epigenetic profile of an unborn child, even before a woman knows she’s pregnant.

Question: What have we learned about these effects?
Murphy: One of our earliest studies examined the epigenetic effects of in utero tobacco smoke exposure. The first gene we identified as exhibiting altered methylation was the imprinted gene insulin-like growth factor II (IGF2), which plays an important role in fetal growth. We found that infants born to smokers had higher methylation at certain regulatory regions of this gene and lower birth weight. That work led to the initiation of the Newborn Epigenetics Study cohort, which has provided a wealth of data and specimens for many other studies on the effects of the environment and exposures on imprinted and other genes, including factors such as antibiotic use, nutrition, depression, stress, and environmental toxins.

Question: What are some questions the field is focusing on now?
Murphy: We are looking closer at the epigenetic effects of paternal preconception exposures. In a recent study, we found that flame retardant exposure is associated with altered DNA methylation at imprinted genes in sperm. Now we’re examining the effects of cannabis and tobacco smoke exposure. We have also shown that babies born to obese fathers have altered DNA methylation at their imprinted genes, which suggests that altered methylation status may be transmitted directly from the sperm. Another group has reported differences in DNA methylation in the sperm following bariatric surgery. However, more work is needed to directly examine heritability of these alterations.

Question: What are the implications of these findings on altered methylation for clinicians?
Murphy: We don’t know yet. Within our NICHES Children’s Environmental Health and Disease Prevention Research Center at Duke, we’ve been looking at how altered methylation from in utero tobacco smoke exposure affects neurobehavioral outcomes, particularly ADHD. The ideal scenario would be to identify a suite of epigenetic changes that can be used as a screening tool to identify babies who are at elevated risk of developing ADHD or other developmental disorders so that earlier interventions can be instituted. I think these tools will be developed for a broad range of outcomes and will help augment the whole idea of personalized medicine, not only for disease treatment but for diagnostics and screening as well.