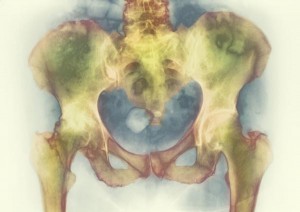 A 61-year-old man who is an avid bicyclist experienced an acetabular fracture as a result of an accident in August 2012. The patient had open-reduction internal fixation to repair his pelvis. The surgery appeared to be successful and radiography indicated that the fracture healed, yet the patient continued to experience a great deal of pain for more than 1 year following surgery.

Question: What was the cause of the pain and how was it treated?

Answer: This patient had avascular necrosis of his femoral head that required hip replacement surgery.

Avascular necrosis develops slowly, and loss of blood supply to the femoral head may not have been evident to the surgeons who repaired the patient’s acetabulum, say Rhett Hallows, MD, a joint replacement specialist at the Duke Medicine–affiliated North Carolina Orthopaedic Clinic. He performs 400 hip and knee replacements every year.

Pain due to the acetabular fracture and the subsequent surgical repair would be similar to that of the necrosis, so, as was the case in this patient, the necrosis is not typically evident for 6 to 18 months. “It was probably hard to delineate the 2 until he started to have visual changes on his radiograph,” says Hallows.

In December 2014, radiographs showed that the patient’s femoral head had collapsed, and the next month the patient sought out Hallows for hip replacement surgery using an anterior approach.

“The patient is a serious bicycle rider—a speed trial racer,” says Hallows, who explains that the hips of these riders are in a “very flexed position all the time because they are bent forward to get into an aerodynamic position. When they are pedaling, their knees come up to their chests, so that is very high hip flexion.”

When using the posterior approach during hip replacement surgery, very high hip flexion can cause hip dislocation, Hallows explains. Dislocation is uncommon, occurring in about 1% to 2% of cases, but it is even more rare with an anterior approach.

Hallows discussed this option with the patient, who thought that this approach could help him become active again more quickly. “Patients are pushing the extremes in recovery now where they don’t want to have to sit around for 6 weeks. They want to be able to get up and move at 2 weeks,” explains Hallows.

He says that the anterior approach helps patients get off their crutches a little bit earlier and with less pain. In fact, Hallows reports, this patient was back on his bicycle trainer at 2 weeks, and he has now resumed his bicycling activities.

Hallows has tried all the approaches—anterior, posterior, and lateral—and prefers the anterior-based, muscle-sparing technique for primary hip replacements. “This approach allows me to put any stem down somebody’s femur and put in any cup I want, so I’m not limited in what I can do with it,” he explains.

The patients Hallows sees receive access to the resources of Duke Medicine in the intimate setting of a specialized orthopaedic clinic, where a team approach ranges from initial diagnosis to treatment to recovery and physical therapy. Patients can also benefit from the experience of fellowship-trained surgeons who specialize in a particular surgery for the situation.