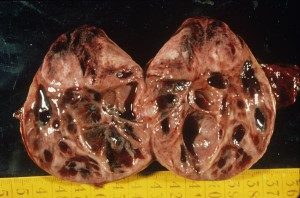 Posterior retroperitoneoscopic adrenalectomy (PRA) is a recently developed surgical strategy for removing adrenal gland masses through the back, and it is proving helpful to many patients. A clinical trial published in the Annals of Surgery has shown that this novel, minimally invasive approach has demonstrated outcomes superior to lateral transperitoneal laparoscopic adrenalectomy and open transperitoneal surgery. Patient outcomes were better with the PRA approach, which conferred shorter operation and recovery times, less blood loss, and less postoperative pain.

Sanziana Roman, MD, a Duke endocrine surgeon, says she sees more referrals for this uncommon procedure. Roman, who is among the first to perform this procedure in the United States, says that most patients with benign adrenal neoplasms can be considered for PRA.

“It is well tolerated and reduces pain and recovery time for patients because the surgeons do not cut as far into the body,” she says. PRA is helpful for patients with tumors on both adrenal glands, occurring in up to 10% of cases. This approach may also benefit patients who have previously had extensive abdominal surgery.

Referrals for PRA are rising as the number of adrenal incidentalomas rises, says Julie Ann Sosa, MD, who heads endocrine surgery at Duke.

Experts must evaluate unknown adrenal masses to rule out pheochromocytoma, a tumor that is typically benign but can release dangerously high catecholamine levels during biopsy or surgery, as well as to rule out hypercortisolism and hyperaldosteronism. Adrenal masses can require close monitoring.

If an adrenal mass measures more than 4 cm, produces hormones, or grows rapidly, then a patient will probably need surgery. PRA is not generally used for malignant adrenal masses.