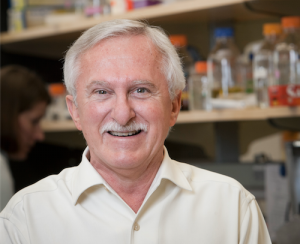 Paul Modrich, PhD, the James B. Duke professor of biochemistry at the Duke University School of Medicine, has been awarded one-third of the 2015 Nobel Prize in Chemistry for his 40 years of work on repairing mistakes in the DNA code. He is also an investigator at the Howard Hughes Medical Institute.

Modrich received a medal and met the Swedish royal family in Stockholm, Sweden, on December 10 as part of a weeklong celebration of the Nobel Prizes in Chemistry, Physics, and Physiology or Medicine.

Modrich began his research on DNA repair in the late 1970s, and his key contribution was identification of the mismatch repair (MMR) system, a key mechanism that identifies and corrects errors in DNA during chromosome replication.

His research shows that inactivation of this MMR system is the cause of the most common form of hereditary colon cancer, and that repair errors also play an important role in the development of Huntington disease and other neurodegenerative diseases as well as in 20% to 30% of spontaneous tumors found in many tissues.

Thousands of DNA errors are estimated to occur each day across the human body’s 10 trillion cells. "In human cells, MMR reduces the error rate by a factor of 1,000," says Modrich. In healthy cells, approximately 1 mutation occurs for every cell division among the 3 billion “letters” of DNA being copied. MMR serves as a “copy editor” to catch and repair these misspellings, which would increase to about 1,000 in its absence.

“Paul’s discoveries about mechanisms of MMR transformed our understanding of this important guardian of our DNA,” explains Michael B. Kastan, MD, PhD, executive director of the Duke Cancer Institute. “DNA repair pathways are critical determinants of whether cancers arise, how cancers respond to therapies, and many of the side effects of cancer treatments. It is difficult to get more important than that combination of effects.”

"I am so thrilled for Duke to have another laureate,” Robert Lefkowitz, MD, says, the 2012 Nobel Laureate in Chemistry and James B. Duke professor of biochemistry at Duke. “Mine was first in the history of the institution, which seems strange, but then you wonder if we are going to have anyone else in the near future. It's so great that we do and that it's Paul."

Modrich earned his bachelor's degree at the Massachusetts Institute of Technology in 1968 and his doctorate degree at Stanford University in 1973. He arrived at Duke in 1976. Currently, he is a fellow of the American Academy of Arts and Sciences and holds membership in the Institute of Medicine and the National Academy of Science. Click here for more information about his laboratory work.

Modrich shares the $960,000 award with Aziz Sancar, MD, PhD, the Sarah Graham Kenan professor of biochemistry and biophysics at the University of North Carolina at Chapel Hill, and Tomas Lindahl, MD, PhD, of the Francis Crick Institute and Clare Hall Laboratory in the United Kingdom.