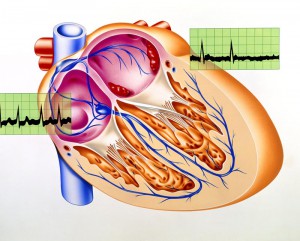 Atrial fibrillation (AF) is a common heart rhythm disorder that increases the risk of stroke by up to five-fold. However, approximately 1 in 10 persons with nonvalvular AF cannot tolerate oral anticoagulation, a proven stroke prevention therapy. Duke is now offering a potentially life-saving option for these patients.

In May, Duke became the first hospital in North Carolina and South Carolina to implant the Watchman (Boston Scientific, Natick, MA) after its approval by the US Food and Drug Administration in March 2015 and commercial release. This left-atrial appendage occlusion device is a mechanical alternative to pharmacologic stroke prevention. By closing off this appendage, a recess in the left atrium where blood clots form in AF, the Watchman device reduces the risk of stroke and bleeding.

An estimated 33 million people worldwide have AF, which is a leading cause of stroke in persons who are elderly. However, less than 75% of patients with AF who are eligible for stroke prevention therapy actually receive it, in part because blood thinners often cause serious bleeding.

"Before the Watchman, there wasn’t an alternative for patients who couldn’t tolerate anticoagulants," says Jonathan Piccini, MD, MHSc, a heart rhythm specialist and associate professor of medicine at Duke.

Studies at Duke showed that, in patients with AF who should be taking an oral anticoagulant, about 2% had an absolute contraindication (eg, intracranial bleeding). Clinical trial data suggest that the Watchman device may be a reasonable alternative to warfarin. In addition, data from more than 2,400 patients suggest that those using the Watchman have lower rates of mortality during long-term follow up than those treated with warfarin.

Although several ways exist to close the left atrial appendage, the Watchman has the largest evidence base and is the only device supported by data from head-to-head comparisons with oral anticoagulation in randomized trials.

When it comes to evaluating patients who might benefit from left-atrial appendage closure and Watchman implantation, Duke uses a multidisciplinary team approach. This team includes interventional cardiologists, interventional electrophysiologists, and invasive echocardiographers and cardiovascular imagers.

Transesophageal echocardiography and computed tomography must be obtained of the hearts of all potential candidates to ascertain the sizes and shapes of their appendages.

“We take measurements to make sure that the device will fit properly,” says Sreekanth Vemulapalli, MD, an interventional echocardiographer and cardiologist at Duke.

Patients being considered for the device cannot have an excessively large appendage because the occlude must fit tightly into the appendage. Approximately 90% of patients are candidates and have a “good fit” based on their anatomy.

A Look at the Procedure

To implant the Watchman, a clinician makes a single access point in the right groin, places a sheath into the right atrium, and crosses over the interatrial septum into the left atrium (similar to the procedures used for catheter ablation of AF). The device is then delivered through the sheath and placed in the left atrial appendage.

During the procedure, imaging is also required when the Watchman device is placed into the left atrial appendage. After the patient undergoes general anesthesia and swallows an ultrasonographic camera, ultrasonography of the heart is obtained from the esophagus.

"We take pictures to guide placement of the Watchman," Vemulapalli explains. Some of the pictures taken by the interventionist use radiographs, which are obtained by an interventional cardiologist or electrophysiologist, and others are simultaneously taken by an echocardiographer using ultrasonography. "Together, these images help us successfully and safely place the Watchman."

"If its position looks good, we deploy the device, remove the delivery sheath, and then close up the incision," Piccini says. The procedure takes approximately 1 hour.

Following the implantation, the patient stays overnight at the hospital and goes home the following morning. It takes some time for the tissue to heal around the device, so patients must take warfarin for 45 days postoperatively. After those 45 days, the patient returns for ultrasonography or transesophageal echocardiography studies. If no signs of leakage are present around the device, then the patient can discontinue warfarin and is prescribed aspirin and clopidogrel.

As with any procedure, this implantation is not without risks, including stroke and bleeding around the heart.

"To date, all 6 patients who had a Watchman device implanted at Duke came off warfarin successfully," Piccini says. Prior to having the Watchman implanted, 1 patient required part of the colon removed due to bleeding, another patient had intracranial bleeding, and another patient had multiple gastrointestinal bleeding that required hospitalization and resulted in a near-death experience.

"These patients were relieved to have protection against stroke without having to take a blood thinner that might predispose them to a life-threatening bleeding event," concludes Piccini.