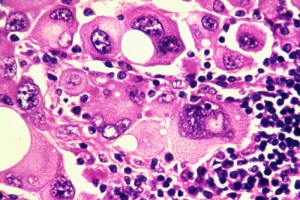 A woman in her 40s was first diagnosed with melanoma in 2008. At that time, the primary melanoma on her leg was surgically removed and had good margins. When the melanoma recurred in 2010 with multiple tumor nodules on her leg, she was referred to Duke and was diagnosed with stage 3 melanoma.

Despite additional surgeries and several months of treatment with interferon and chemotherapy, which included leg perfusion, the cancer continued to metastasize. When it metastasized to bone, she experienced a fracture and required hip replacement.

When the patient was referred to April Salama, MD, a medical oncologist at Duke, she had stage 4 melanoma with metastases to the liver, lungs, and brain. In 2013, she underwent radiotherapy and radiosurgery for her brain metastasis.

The patient then participated in a clinical trial that was testing various doses of the checkpoint inhibitor ipilimumab, which is approved by the US Food and Drug Administration (FDA) to treat metastatic or unresectable melanoma. The trial was designed to determine whether a higher dose of the drug would be more effective than lower doses, and the patient showed some benefit.

However, when the tumors continued to grow, standard-of-care options were no longer available for this advanced, aggressive melanoma.

Question: What alternative did Salama begin to explore that could provide the patient with other options?

Answer: Salama was conducting a trial of the checkpoint inhibitor nivolumab for patients whose melanoma had grown after receiving ipilimumab, so this patient was enrolled in that clinical trial.

Nivolumab targets the programmed death 1 pathway, which is a checkpoint in the immune system. The cells of some cancers bind to a T-cell surface receptor, programmed death ligand 1, which is thought to be an important switch for limiting the inflammatory response. Salama explains that the cancer cells bind to it, turning off the switch and effectively “putting the T cell to sleep.”

Nivolumab also blocks cancer cells from engaging the receptor. The underlying concept is that, by removing the checkpoint, the immune system will attack the cancer on its own.

In spring 2013, the patient began receiving intravenous nivolumab every 2 weeks. After 4 doses, results on positron emission tomography (PET) showed a clear response. In December 2013, following 15 doses the tumors had decreased in size and were “barely seen on PET,” explains Salama.

This response was so great that the patient agreed to a treatment break because of several concerns, one of which was that she had to travel several hours to reach the clinic.

“Since that time, her scans have continued to look great. She still has some residual small abnormalities where the tumors used to be, but they really don’t light up on PET scans,” Salama says.

The results of that clinical trial led to the FDA approval of nivolumab in December 2014.

The availability of clinical trials for patients with difficult cases is an advantage that Duke offers, but Salama underscores that this patient also benefited because she received state-of-the-art care every step of the way. Although the other modalities did not cure her cancer, they staved off an aggressive malignancy and kept her alive until a more successful therapy became available.

“We have a multidisciplinary program where we have surgeons, dermatologists, radiation oncologists, and dermatopathologists practicing together, communicating together frequently,” she says. “It really is 1 team caring for a patient, and it is very patient-centered.”