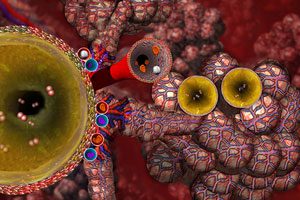 A 29-year-old woman with cystic fibrosis on the waiting list for a bilateral lung transplant experienced sudden respiratory decline due to severe infection. Despite emergency intravenous antibiotics, her condition worsened. Her carbon dioxide level spiked to 109 mm Hg—more than double the normal value. She was experiencing life-threatening acidemia.

The patient was at risk of acute hypercapnic respiratory failure, but pulmonologists had no available organs to transplant and few life-sustaining options.

Question: The transplantation team contacted the Duke Division of Pulmonary, Allergy and Critical Care Medicine to explore alternative options. What actions did Duke take to extend the patient’s life and preserve the possibility of lung transplant?


Answer: Duke dispatched an airlift helicopter with an emergency team equipped with extracorporeal membrane oxygenation (ECMO) for the patient's transfer. The patient was placed in a medically induced coma before the flight and was stabilized using venoarterial (VA) ECMO.

Because the patient was at risk for sudden respiratory failure and death, Duke cardiothoracic surgeon John C. Haney, MD, boarded the flight to monitor and adjust ECMO, as needed. During the flight, Haney converted the patient to a venovenous (VV) ECMO circuit to further lower her risk. The patient was admitted to Duke Hospital in mid-June 2014, and a bilateral lung transplant was performed at the end of that same month.

The change of ECMO from VA to VV cannulation of her right internal jugular vein with a single cannula was instrumental in allowing the patient to be ambulatory.

“We prefer patients to be awake, nonsedated, and mobile,” says John M. Reynolds, MD, the medical director of Duke's transplantation service. “This allows the patients to maintain or even improve functional status while awaiting transplant.”

Although complex cases are common, the urgent nature of this situation was unusual, Reynolds says.

“We were suddenly working with a young cystic fibrosis patient who was new to our health system with a clearly life-threatening illness,” remembers Reynolds. “Without an urgent workup for transplantation, she would have passed away.”

Despite the challenges, donor organs were acquired and a successful transplant was performed approximately 2 weeks after her arrival at Duke. Three weeks later, the patient left the hospital. She began pulmonary monitoring and rehabilitation in the Duke system and worked to regain her strength.

Following a remarkably prompt recovery, the patient returned home approximately 1 month after completing her rehabilitation. Now 2 years after surgery, she has not experienced any respiratory complications and has returned to a normal life with her family and 8-year-old son, who requires special care for autism.

“This case did not follow our usual course of action allowing for an extended preparation schedule and normal workup,” Reynolds says. “But it shows we are able to help patients with hypercarbic respiratory failure utilizing medical technology like ECMO, despite a late referral, and successfully bridge them to transplant. It was certainly a very gratifying outcome, most importantly for the patient and family but also for our program.”