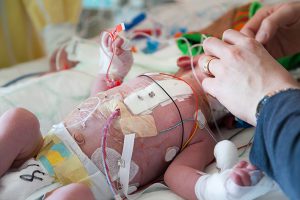 The neonatal intensive care unit (NICU) at Duke Children’s Hospital is outperforming comparable international centers in rates of mortality, chronic lung disease (CLD) among survivors, and mortality, survival, or diagnosis with morbidity during NICU stays, according to data collected by the Vermont Oxford Network (VON).

Comprising nearly 1,000 centers around the world that voluntarily submit data regarding the care and outcomes of neonates at high risk, VON enables members to analyze their accumulated data and compare them with equivalent centers. Duke completed its first full year of participation in VON in 2009.

These data, as well as the 25th and 75th percentile rates of these outcomes for VON NICUs, are shown in the Figure. 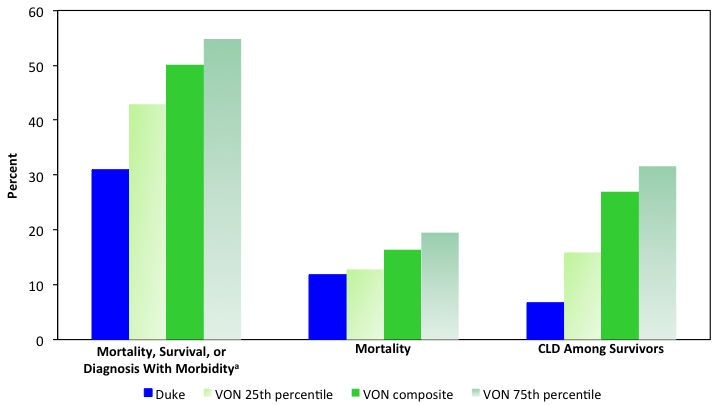 “For high-risk neonates, time in the NICU is critical for surviving without morbidity, as is the continuity in care received by the mother and neonate,” says neonatologist Ronald Goldberg, MD. “These numbers show that premature neonates fare better at Duke.”

Duke joined VON to measure, compare, and improve outcomes in the NICU.

“Our team follows VON guidelines in measuring and reporting our outcomes to ensure they are as objective as possible,” says neonatologist C. Michael Cotten, MD. “The VON data help us to see how well we’re doing as a field and site and to identify areas we need to work on. With the exception of CLD, participating in this ongoing dialogue on how to improve outcomes has led to major reductions in all morbidities and mortalities.”

Care at Duke’s NICU is delivered by a multidisciplinary team, including dedicated nurses and respiratory therapists who make recommendations on unit operations and individual patient plans, as well as nutritionists and pharmacists who round with physicians and neonatal nurse practitioners to help improve care and reduce errors. Families are included as much as possible and are provided with a parent advocate, advisory board, and social workers.

“If a neonate is severely premature and in need of intensive care, the odds are already stacked against him or her,” explains neonatologist David T. Tanaka, MD. “To use an analogy, much like the Titanic, outcomes are a matter of access to care. Once a neonate is in the lifeboat, their chance of living is greatly improved. What these data suggest is that there may be a difference between being in a lifeboat versus a life raft."

Duke’s neonatal program delivers robust assessment, support, and care, providing follow-up care for the first year of life or beyond. Weekly meetings include subspecialists and surgeons from multiple divisions and departments at Duke and are held to discuss complex cases and approaches to patient care, often before a neonate is even born.

The program has added palliative care capabilities and is developing cardiology and neurology units. With 6 beds already designated for neonates with neurologic issues, Duke’s NICU is one of only a handful of “neuro-NICUs” in the United States. The NICU team is also working closely with neonatal neurologist Monica Lemmon, MD, who is educating its nurses and physicians about placing greater emphasis on integrating quality of life into clinical care.

“We’re constantly learning so much from so many sources about supporting children and families in and out of the NICU,” says Cotten. “In some ways, we’re really just starting out. There’s still so much room for growth, development, and improvement.”