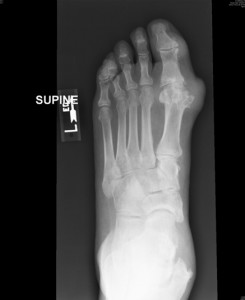 In April 2014, a 75-year-old patient with a 30-year history of poorly managed gout in the interphalangeal joint of his left big toe presented at Duke Medicine’s rheumatology department. The patient had been referred to Duke rheumatologist Robert Keenan, MD, by his primary care physician because the patient did not want to take therapeutic doses of allopurinol due to its gastrointestinal side effects. At presentation, the patient reported waxing and waning flare-ups typical of gout. At that time, he was taking 100 mg allopurinol per day for antihyperuricemic maintenance therapy. In addition to having gout, the patient also had a history of hypertension, hyperlipidemia, mild renal insufficiency, and hypothyroidism. He was also scheduled to undergo hip surgery in several weeks’ time.

“At his initial visit, his serum urate was elevated (6.8 mg/dL), and he had an intermittently draining tophus in his left big toe, but didn’t really want to pursue more aggressive treatment for his gout,” Keenan explained.

When Keenan was able to see the patient 2 weeks later, the tophus was open and draining, and there was no evidence of infection. “I explained that without treatment for his gout, the open wound caused by the tophus was unlikely to heal,” Keenan said.

What treatment would you suggest to enhance outcomes for this patient?

Answer: The patient was treated with pegloticase, which was approved in 2010 for chronic gout refractory to conventional therapies.

Keenan told the patient that with traditional oral therapy, such as allopurinol, it could take months or even years for his wound to heal. Keenan recommended pegloticase, a novel PEGylated uricase enzyme that was approved by the United States Food and Drug Administration in 2010 for the treatment of chronic gout refractory to conventional therapies. Pegloticase was developed by Michael Hershfield, MD, and colleagues at Duke University.

“Pegloticase is a genetically engineered mammalian recombinant uricase, so it basically gives back the enzyme for breaking down uric acid that we as humans don’t have,” Keenan explained. Pegloticase metabolizes uric acid into allantoin, which is then excreted by the kidneys.

Two clinical trials out of Duke demonstrated that approximately 42% of patients with treatment-resistant gout who were treated with pegloticase reached the primary endpoint (serum urate < 6 mg/dL) at 6 months. However, treatment outcomes were more nuanced, Keenan explained. “It seemed to be an all-or-nothing kind of thing—most patients with draining tophi who responded did so very well and had significant reductions in serum urate, tophus resolution, and even wound healing,” he said.

Keenan’s patient decided to try pegloticase, which is administered by infusion every 2 weeks. Treatment began in late July. “By the end of September, the wound had healed and the tophus had shrunk considerably,” Keenan said. “He was pretty happy.” The patient’s serum urate remained undetectable (< 0.5 mg/dL) throughout treatment.

One important limitation of pegloticase is that patients can develop antibodies to the drug, which usually happens early in the course of treatment and may result in serious reactions that require medication discontinuation. “We found that instead of checking antibodies [to pegloticase], you can check serum uric acid as a surrogate marker before each infusion. If serum urate is more than 6 mg/dL just before infusion, then there’s a good chance the patient has developed antibodies, and we stop medication to avoid possible reactions,” Keenan explained. (Pegloticase is also contraindicated in patients with glucose-6-phosphate dehydrogenase deficiency.) He said it was unlikely that this patient would be at risk of developing antibodies to pegloticase given how far he was into treatment; it was likely that he would continue to respond well to the drug.

In clinical practice, gout is often poorly managed because of inadequate treatment. Management is complicated by the fact that effectiveness of the most commonly used urate-lowering drug, allopurinol, is frequently limited by adverse events, which occur in approximately 20% of patients. As was the case with this patient, subtherapeutic allopurinol dosing is common because of side effects.

Keenan said clinicians are often unfamiliar with pegloticase or shy away from its use because of potential drug reactions, but he has used it safely in a wide variety of patients. “Referring physicians know the drug was developed at Duke, so they often refer difficult-to-treat patients to us,” he noted.