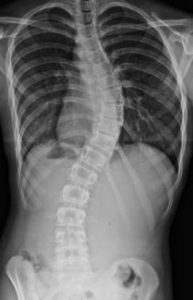 FIGURE: Scoliosis presentation similar to that of the patient in this case.

A pediatrician observed an unnatural curvature in the spine of a 10-year old girl that appeared to be early evidence of scoliosis. After conferring with the patient’s parents, the physician referred the patient to Duke for further assessment.

Question: What novel procedure did a Duke orthopaedist perform to promote more natural growth of the young patient’s spine and preserve future flexibility? 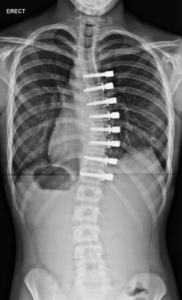 FIGURE: Vertebral tethering procedure in a patient with scoliosis. A polypropylene rope is used to promote a convex curve.

The growth modulation technique is designed to promote straighter, more natural spine growth in young patients with scoliosis. During the procedure, the surgeon uses a polypropylene rope to tether the spine to promote a convex curve, Lark says. Because of the spine’s natural growth, its concavity eventually catches up with the convex curve.

“This is a way to modify the growth of the spine and avoid spinal fusion,” Lark says. “We are able to adjust the angular deformity with a tether that can be removed at the appropriate time.”

Lark and the patient’s parents are pleased with the outcome and prognosis 3 months after surgery. “We are already seeing that her waistline has straightened out and her shoulders are not protruding as far,” Lark says. “She’s had a very successful outcome.” 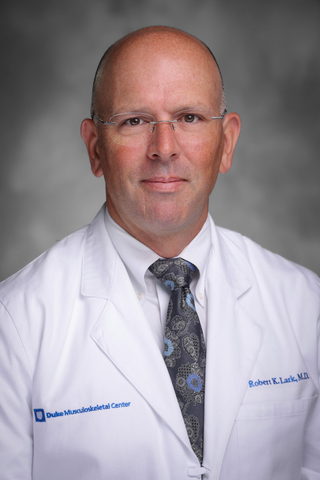