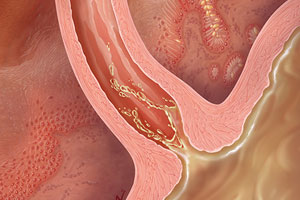 A novel procedure to treat gastroesophageal reflux disease (GERD) is being pioneered by Duke surgeons as an alternative to fundoplication—the surgical standard of care for GERD—and proton pump inhibitors (PPIs).

The LINX Reflux Management System (Torax Medical, Shoreview, MN), a small flexible band of interlinked titanium beads with magnetic cores, is laparoscopically implanted. The medical device was approved by the US Food and Drug Administration (FDA) in 2012.

“The device is engineered to behave like a real, dynamic lower esophageal sphincter,” says Duke thoracic surgeon Matthew G. Hartwig, MD. “It opens when you swallow to let food through but remains closed at other times. This leads to an effective reflux barrier with very few side effects, just the way the human body intended it to be.”

Approximately 6,000 LINX devices have been implanted globally, Hartwig says. Duke was the first medical center performing the procedure in North Carolina and has been offering the procedure since 2014.

Hartwig and Jacob A. Klapper, MD, a thoracic and gastrointestinal surgeon at Duke, have undergone specialized training. Although the overall number of these devices implanted in the United States is still limited, that number is expected to increase as health insurance coverage decisions are finalized.

PPIs have long been recommended as the preferred medication for GERD and are generally well tolerated at low doses. However, concerns about their long-term use have prompted the FDA to require warning labels regarding their risk of bone fractures, changes in the bacterial make-up of the digestive tract, and increased risk of Clostridium difficile infection.

“Our interest in the LINX procedure represents an effort to find a newly engineered resolution to reflux disease,” says Hartwig. “We see many patients who want to come off PPIs but don’t want to undergo the more invasive fundoplication procedure.”

During fundoplication (stomach wrap), the gastric fundus is wrapped around the lower end of the esophagus and stitched in place to reinforce the closing function of the lower esophageal sphincter. Although the surgical fundoplication is very effective at preventing reflux, some complaints, such as abdominal bloating and flatulence, are more common following fundoplication than after the LINX procedure.

“With minimally invasive laparoscopy, patients have a few small incisions,” Hartwig says. “They return home after 1 night in the hospital. The data suggest we are using a very durable magnet that lasts as long as we do. It’s a lifetime fix.”