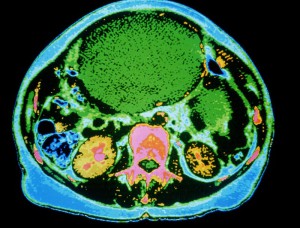 A 61-year-old woman presented to Duke Health with advanced, low-grade serous carcinoma of the ovary. The patient first noticed lower left quadrant pain in 2010. Findings on computed tomography (CT) were negative, except for a small adrenal mass. Her symptoms progressed, and, in May 2012, follow-up CT revealed omental caking and carcinomatosis.

A general surgeon at Duke performed laparoscopy and biopsies, which demonstrated extensive, unresectable cancer involving all peritoneal surfaces. The patient was then referred to Fidel Valea, MD, a gynecologic oncologist at Duke, who recommended paclitaxel/carboplatin chemotherapy per the guidelines from the National Comprehensive Cancer Network. He hoped to surgically debulk the cancer after 3 cycles of chemotherapy.

However, when the patient underwent exploratory laparotomy in December 2012, her slow-growing, low-grade disease did not respond to therapy and was still unresectable.

She was then offered the choice to receive further conventional chemotherapy or try a different drug, bevacizumab. She considered using bevacizumab because her tumor was unresponsive to chemotherapy the first time and she had experienced severe adverse events, including worsening of her existing neuropathy. She also considered palliative care.

Question: Given this patient’s diagnosis, should further testing be done to determine whether another type of therapy would be a more effective option for her?


Answer: Yes. After learning about a genomic profile test that can be used to determine the presence of select mutations, Duke physicians determined that a different drug was available to exploit her mutation.

Her tumor was sent for testing to FoundationOne, a hematologic and oncologic genomic profiling company, for the evaluation.

“We took a shot in the dark,” explains Valea. At that time, no clinical trials for this type of tumor testing existed to identify potential targeted therapies. However, a national trial is now underway.

After a unique mutation in the estrogen receptors of her tumor was detected, Valea recommended using fulvestrant, a first-in-class, estrogen-receptor antagonist with no known agonist effects. Unlike chemotherapy, fulvestrant does not eradicate tumors; rather, it prevents cells from reproducing. The patient opted to try fulvestrant rather than bevacizumab, and she was fully aware no data yet existed on its use in ovarian cancer.

The patient initiated 500-mg injections of fulvestrant in January 2014 and has been receiving them each month since. Her cancer antigen 125 tumor marker level, once elevated to 43.2, decreased and then stabilized within the normal range at 8.9.

Findings on CT in July 2015 revealed she still had some scattered calcifications likely related to her disease, but omental caking was no longer present. The patient is now living a fully functional life without any clinical evidence of disease.

“She will most likely continue on this regimen because it appears to be effective, and the adverse events are very manageable,” says Valea, who has no immediate plans to take her off the therapy because the disease could return.

“At Duke, we sometimes do unconventional treatments when warranted,” Valea says. “We try to provide cutting-edge therapy.”