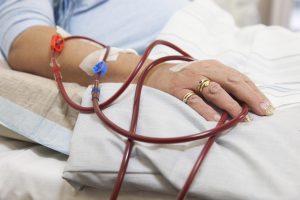 A pilot project assessing nocturnal hemodialysis at home for motivated patients with end-stage renal disease has passed its first anniversary and is demonstrating modest growth.

Launched and directed by Ruediger W. Lehrich, MD, and the Division of Nephrology at Duke, the pilot project has enrolled and trained 4 patients who participated in the home hemodialysis program. Training requires 6 to 8 days divided between the patient’s home and the dialysis training clinic.

“From a patient’s perspective, this offers a very convenient way to deal with the burden of dialysis,” Lehrich says. “It’s the least intrusive method to manage renal replacement therapy.”

By completing dialysis while sleeping, patients can maintain a normal professional schedule—a factor that provides a great deal of momentum, Lehrich says.

Duke Health embraced the pilot project to explore options for patients. Lehrich cautions, however, that outcomes may not be superior to home hemodialysis, which is often a patient’s first step toward nocturnal dialysis.

“Our early assessment is that nocturnal dialysis is effective and safe—and provides an important alternative we have an obligation to explore—but we will need more time to assess outcomes,” he cautions.

However, Lehrich notes, safety remains the chief concern. With 300 to 400 mL/minute of blood circulating through the dialysis circuit during nocturnal dialysis, a mechanical problem leading to uncontrolled bleeding could be detrimental.

“There is very, very little room for error, and we plan for that,” Lehrich says. “We are mainly concerned about needles dislodging, which could lead to significant bleeding.”

A wet detector—a small device situated on the skin adjacent to the needles used during dialysis—will sense even a single drop of moisture around the connection. The device is connected to an audible alarm loud enough to wake the patient and trigger a response from a family member or caregiver who also monitors the alarm.

“We want to explore the best options for our patients, and nocturnal dialysis is obviously among those options,” Lehrich says.

Early dialysis began with large, home-based machines, which permitted renal cleansing before hospital-based dialysis was readily available, he says. “In some respects, we are returning to an idea from the 1960s,” Lehrich says. “The technology is much more advanced now, but the idea is the same.”