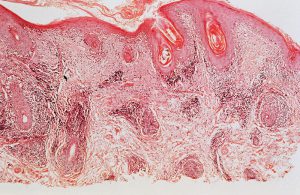 The production and release of microparticles during cell death may create a new type of biomarker that can provide more objective measures of disease activity to help clinicians assess and monitor lupus and other inflammatory disease conditions.

Microparticles, which are small pieces of cells that break off as cells die, circulate in the blood where their presence can be measured by ordinary laboratory instruments.

Duke Health’s David Pisetsky, MD, PhD, leads research into the mechanisms of autoimmunity and works toward a clearer understanding of rheumatology at the cellular level.

“We are very interested in using microparticles as biomarkers for what’s going on in lupus and related diseases,” explains Pisetsky. “This approach may also offer a new way of looking at the role of immune complexes, which are thought to be key to the etiology of lupus.”

A clinician, researcher, and master in the American College of Rheumatology, Pisetsky has demonstrated that dying cells release microparticles containing DNA as well as a protein called high mobility group box 1 (HMGB1). HMGB1 is an example of a new type of mediator of inflammation called an alarmin because it alarms the immune system.

According to his research, the level of HMGB1 protein is elevated in the blood of patients with lupus, making it a potential biomarker. Those with rheumatoid arthritis also show the presence of this biomarker, says Pisetsky. An important advancement of this research has been to show that HMGB1 is present on particles and that analysis of particle HMGB1 may be a much more sensitive approach to determining its levels and association with inflammation.

Pisetsky’s work also indicates that the characteristic autoantibodies in lupus can bind to particles, suggesting an important role of the particles in the formation of immune complexes that lead to serious comorbidities in lupus such as kidney disease.

“These biomarkers may offer a more objective way to measure disease activity in these conditions,” comments Pisetsky. “Such measures could determine the level of inflammation more objectively and help in interpreting more subjective and variable descriptions such as patient reports of joint pain.”

A characteristic of lupus is the presence of antibodies that attack cells and damage tissues and organs. “What we’re trying to do is extend the importance of cell death, which is the key to many diseases because a dead cell can induce inflammation via its production of microparticles and can produce the autoantigens to form immune complexes,” Pisetsky says.