Non-invasive transcranial direct current stimulation has significant potential to contribute to the otherwise sparse landscape of stroke recovery therapies for post-stroke limb weakness, according to Wuwei “Wayne” Feng, MD, MS, the new chief of the Stroke and Vascular Neurology Division in the Department of Neurology.

“Treatment for stroke rehabilitation and recovery is quite lacking, as there is not much well-established evidence in the field,” says Feng, who also serves as medical director of Duke’s Comprehensive Stroke Center. “We want to particularly focus on brain modulation techniques and hope to bring more research to this much-needed area to come up with new ways to zap the brain and develop new therapies for patients.”

To further these efforts, Duke soon will become the 13th stroke center in the United States to participate in a four-year phase II multicenter transcranial direct current stimulation study funded by an $8.1 million grant from StrokeNet, a National Institutes for Health program. The TRANScranial Direct Current Stimulation for POst-stroke Motor Recovery:  A phase II sTudy (TRANSPORT 2) will evaluate three dosing selection based on the preliminary efficacy, safety, tolerability, and feasibility for participants who have experienced a first-ever ischemic stroke within one to six months of enrolling in the study.

During the study, patients will receive direct current to the scalp through two electrode pads for 30 minutes per day while simultaneously receiving modified constraint-induced movement therapy for two hours per day. The three dosing groups are sham, 2 milliamps, and 4 milliamps, and patients will return to Duke for 10 total intervention sessions over a two-week period.

“If we can select the optimal dose group from this study and confirm the effectiveness in the phase III study, this will become a new rehabilitation therapy for stroke patients with motor deficits—the most common complication after stroke,” he says.

Feng explains the benefit of this combination of therapies: On the central nervous system/brain level, patients receive positive current on the affected side to boost brain activity and negative current on the unaffected side to suppress brain activity. On the peripheral nervous system/limb level, patients suppress the movement of the unaffected hand by wearing a large mitten while receiving high-intensity therapy to force the use of the hand affected by stroke. “In this way, patients get double stimulation to trigger the brain to rewire itself to function better,” Feng adds. 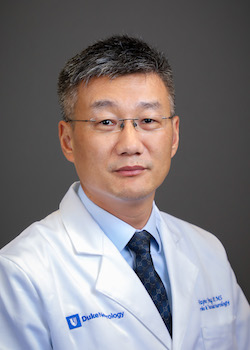 If we can select the optimal dose group from this study and confirm the effectiveness in the phase III study, this will become a new rehabilitation therapy for stroke patients with motor deficits—the most common complication after stroke.
Wuwei “Wayne” Feng, MD, MS, chief of the Stroke and Vascular Neurology Division

As part of the TRANSPORT 2 study, Feng has developed an imaging biomarker that helps determine the exact location and severity of damage to the corticospinal tract—the pathway that connects the brain to the limb—in patients who have experienced ischemic stroke.

“We use a combination of imaging biomarkers developed by my lab, a neurophysiology tool, and clinical assessment to carefully calculate the exact brain damage from the stroke,” Feng says. “This approach will help identify what kind of patients will best respond to this type of brain stimulation intervention.”

In addition to leading this national study, Feng and his team in the brain modulation and stroke recovery lab will focus on the study of other non-invasive neuromodulation tools in stroke recovery, including transcranial magnetic stimulation, low-intensity focused ultrasound, and a remote-ischemic preconditioning tool that Duke researchers will study patients to develop future innovative techniques for stroke recovery.

Patients can enroll in the TRANSPORT 2 study or the various other stroke rehabilitation studies at Duke’s brain modulation and stroke recovery lab by contacting Kristina Balderson at kristina.balderson@duke.edu or 919-684-0071. 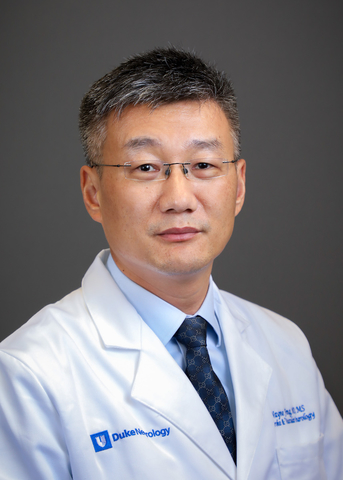