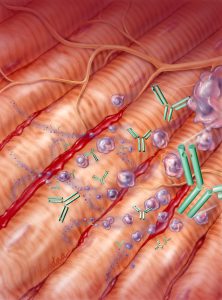 A 46-year-old man who worked out and regularly lifted weights presented to a primary care physician with recurring hand weakness and sudden, unexpected falls. As a college javelin champion and current amateur boxer, the patient’s excellent physical condition made the diagnosis more challenging.

Question: What steps were required for Giattino to make a definitive diagnosis?

Answer: A workup that included skeletal muscle imaging, muscle biopsy, and genetic testing led to a diagnosis of myofibrillar myopathy with an LDB3 mutation, a rare condition in which sarcomeres become misaligned and result in disorganized muscle fibers.

Clinicians often suspect inflammatory myopathy when encountering an elevated CK level in a patient of his age. “It was a peculiar situation,” recalls Giattino. “The elevated CK is usually a sign of muscular breakdown and inflammation, but the diagnosis still was not clear.”

She continues: “We usually find proximal muscle weakness in a case of inflammatory myopathy, but he presented with an atypical distribution, which we thought initially may have been due to his overall strength.”

During several visits for evaluation, the patient’s level of weakness increased. He began to fall at work and required a cane for safe ambulation.

To assess for myopathies, Giattino obtained electromyography, which revealed muscular abnormalities. Findings on muscle biopsy were inconclusive, but the results were not consistent with an inflammatory myopathy. “These findings raised concerns about an inherited condition such as muscular dystrophy,” Giattino says.

The patient had previously informed his health care team that his grandmother and mother experienced unusual lower limb weakness in their mid-60s. Both needed canes and walkers at relatively young ages. The patient, however, was the only family member to encounter similar conditions in his 40s.

“We don’t usually see a case such as this in the rheumatology clinic, as it’s something more commonly managed by neurology,” Giattino says. “Because his condition is not inflammatory in nature, there is no targeted treatment we can offer him from a rheumatology perspective.”

The patient was then referred to the Duke Muscular Dystrophy Association Clinic, where physicians are working to identify a relevant clinical trial for which he can enroll.

Despite the diagnosis, the patient intends to remain active. He has adjusted his exercise routines to renew his javelin interest and to attempt to make the 2017 World Para Athletics Championships in London. The diagnosis qualifies him as a paralympic athlete, he says.