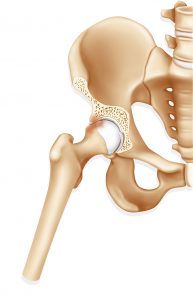 A 22-year-old college graduate preparing to enter an officer-candidate program experienced severe hip pain after rigorous running as he trained for the demands of military physical conditioning.

The hip pain, which initially presented during his junior year in college, became more intense over 2 years. He could run without discomfort but experienced extreme pain afterward, usually requiring 2 to 3 days to recover.

Questions: How did Lewis and the Duke team make a diagnosis? What treatment did they recommend?

Answer: Recognizing the symptoms of femoroacetabular impingement (FAI), also known as hip impingement syndrome, Lewis confirmed the diagnosis using arthrogram, a flexion, adduction, and internal rotation (FADIR) test, and the patient’s descriptions of the pain. He recommended reattachment of the torn labrum and reshaping of the hip socket to eliminate the impingement. The Duke team performed both procedures via arthroscopy. A 3-dimensional model of the joint based on magnetic resonance imaging helped guide the procedure.

Lewis initially reviewed nonsurgical options involving physical therapy and restricted activity, but the patient’s future plans required an active lifestyle. Because his previous physical therapy had been ineffective, the patient wanted a long-term solution. Lewis recommended the surgical procedures to ensure the patient would have a greater likelihood of regaining activity without pain.

Lewis says orthopaedic training has rapidly evolved during the past decade and now includes emphasizing FADIR test results and patient pain descriptions as indications of FAI. “Unfortunately, this particular misdiagnosis remains a common problem,” Lewis says. “Recognition of FAI is improving, but we have a long way to go.” The early therapies attempted for this patient “were correct for the conditions they thought they were treating,” Lewis says.

FAI is caused by a shape mismatch between the ball and socket of the hip joint that produces inadvertent contact, which usually damages the acetabular labrum. Some sockets may be too pronounced or overdeveloped, whereas others may connect to a ball that is not spherical.

During activities such as running, the abnormal contact can damage other hip structures. If it is left untreated, the condition often results in painful, long-term osteoarthritis.

Fortunately, for this patient, the condition was treated early enough to permit a complete and uncomplicated recovery. The patient is now preparing to resume his military career.