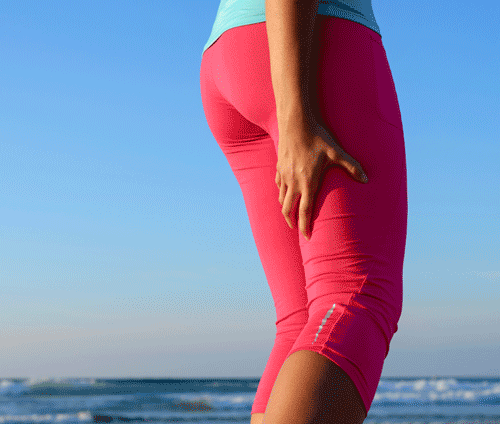 An active, 48-year-old female triathlete with a labral tear due to femoroacetabular impingement and a partial-thickness, proximal hamstring tear sought treatment at Duke. Her injuries were caused by repetitive microtrauma as a result of her activity and presented a rare situation because they occurred simultaneously.

The patient experienced groin and buttock pain particularly when sitting, with increased activity such as sprinting, or when stretching out her left leg. The pain also radiated down her thigh and sometimes extended to her foot. Her sciatic nerve was irritated at times. In general, her vital signs and health were very good.

Question: Although arthroscopy for a labral tear is common, the standard procedure for a hamstring tear is to make an open incision and surgically repair the hamstring tendon. However, is there a better alternative for this patient?

“By magnifying the area 7 times, I was able to be more precise,” Mather says. “This is very important because the sciatic nerve runs right next to the partially torn tendon, which was highly degenerative. I felt more comfortable protecting and releasing the nerves than I would have with open surgery.”

The large gluteus maximus muscle covers the hamstring origin on the ischial tuberosity, making access to the surgical area difficult. During open surgery, it must be strongly retracted, which can stress the muscle. However, because the procedure was endoscopically performed, Mather went through the muscle using a portal and lifted it up using a saline solution. He says this provided a good space through which to work.

“It is easier from a technical standpoint and less risky for the patient,” he explains. “The main risk of open surgery is injury to the posterior femoral cutaneous nerve. This process lowers the risk by lessening the likelihood of stretching the nerve when retracting the gluteus maximus.”

Mather also recommends the procedure because of its cosmetic advantages and because it’s less invasive to soft tissues than other techniques.

After the procedure, the patient used crutches for 3 to 4 weeks. She began physical therapy within the first few days and used a brace to protect her hip joint and hamstring. After 8 weeks, she began strengthening exercises and progressed to normal activity.

“The patient had to overcome deconditioning from surgery and learn to move in a healthy way because she developed bad habits with the slowly progressing chronic injury,” Mather explains.

However, the patient made a full recovery and has even participated in a half-Ironman race. “This is an outstanding result,” Mather says. “All of her preoperative symptoms are resolved. She’s been able to do everything she wants to do.”

The perception that hip arthroscopy is only for younger patients and can only be palliative for older patients is a misunderstanding in the medical community, adds Mather, who is one of only a few physicians to use an endoscopic approach in such a case.

Mather explains that being innovative sets Duke apart, because it is working to invent the future through its research and history of pioneering advances in orthopaedic medicine.