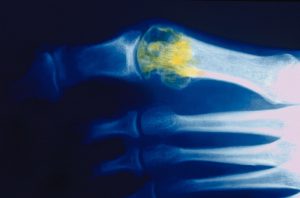 Recent progress in the development of new drugs to treat gout, which specialists consider to be undertreated, has given rheumatologists more optimism regarding future urate-lowering therapies.

Keenan is the lead author of a review on new and pipeline drugs published in the April 2016 issue of Current Rheumatology Reports. He recommends that future gout medications effectively target the steps of the “inflammatory cascade” while limiting adverse effects.

The majority of established gout treatments are therapeutic and inexpensive, Keenan says, but comorbidities, intolerance, and unresponsiveness limit their effectiveness. In addition, he notes that some existing formulations do not effectively help patients reach the target serum urate level in cases involving severe gout, higher urate levels, or both.

Describing it as the “most common inflammatory arthropathy in the western world,” Keenan says increasing attention paid to new gout formulations will help inform health care professionals about treatment options. “Despite an evolving understanding of how gout and hyperuricemia occur, they're still undertreated,” says Keenan.