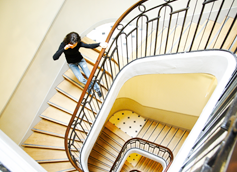 A 25-year-old woman reported recurrent syncope since 14 years of age. When she swam competitively as a teenager, she fainted several times after exiting the pool. Extensive cardiac testing at that time revealed induced arrhythmia called atrioventricular nodal re-entrant tachycardia, which was ablated. However, her symptoms didn’t resolve.

Due to concern about a fairly pronounced cardioinhibitory response, the patient had a pacemaker placed at 15 years of age. Despite this, the syncopic episodes continued.

After her medications were adjusted, she saw some improvement but still lived a debilitated life. She was homebound, unable to work, and couldn’t be left alone for lengthy periods due to occasional fainting. She required a chairlift to go upstairs. On a good day, she could perform a low-level activity, such as grocery shopping.

Question: Can other measures be taken to improve her quality of life?


Answer: Yes, medication changes and physical therapy can improve her quality of life.

At Duke, the patient underwent testing, including a tilt table test, the result of which led to a diagnosis of vasovagal syncope. Subsequent testing also revealed postural orthostatic tachycardia syndrome and ankylosing spondylitis.

“Although the patient had the appropriate procedures performed over the years, she needed her medications changed to minimize syncope and improve her quality of life,” says Camille G. Frazier-Mills, MD, a heart rhythm specialist at Duke Syncope and Dysautonomia Clinic. In addition to the 2 forms of dysautonomia, the patient had episodes of orthostatic hypertension independent of heart rhythm changes.

Specifically, midodrine and pyridostigmine were adjusted to improve her blood pressure. When her blood pressure was stable, a beta blocker was added to lessen her heart rhythm fluctuations. After her hemodynamics were better controlled, methylphenidate, which is a low-dose, long-acting stimulant, was added to her regimen to improve her energy level and reduce fatigue related to her disorder.

The patient is doing well with the medication adjustments and exercise training, which now includes a daily regimen of yoga. She lives a relatively high-functional life, and she now teaches yoga classes part-time.

The patient is also participating in hot yoga, which enables her to go outside in the summer months and travel. “Patients with this disorder usually can’t endure heat because they pass out, but she has trained herself to tolerate it,” Frazier-Mills says.

Today, the patient's condition continues to be monitored by Frazier-Mills and other members of her health care team. She still has some limitations, but even those are markedly improved. “While I may not have saved her life, I made her feel a lot better and gave her back a quality of life that she hadn’t had in many years,” Frazier-Mills comments.

Frazier-Mills believes this was achieved by integrating the latest updates on dysautonomia management with close follow up. “Duke has an excellent team of physicians, therapists, and collaborators who work with us to improve patients’ overall quality of life,” she adds.