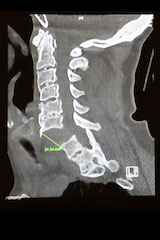 After getting into a serious car accident, a 91-year-old man was rushed to Duke. Upon arrival, he could move his legs slightly but was experiencing profound weakness in his arms. CT scan showed that his spinal column had been severed, but his spinal cord was intact.

Given the complexity and delicacy of the patient’s condition, Duke neurosurgeon and spine surgeon C. Rory Goodwin, MD, PhD, conferenced with his neurosurgery colleagues to develop a plan for surgery. In particular, he wanted to make sure the patient didn’t sustain another injury while waiting to be moved into the operating room.

“One of the best things about Duke from my perspective is that we have so many experts, especially in the field of spine,” Goodwin notes. “When the patient came in, I got on the phone with Drs. Karikari, Barr, Abd-El-Barr, and Yarbrough, to develop a game plan for what would be best for him, given his age and the extent of his injury. So, although I would be the one performing surgery, it was really a team effort.”

Together with chief neurosurgery resident Jordan Komisarow, MD, Goodwin performed closed reduction under fluoroscopic guidance. Once the patient’s spinal column was correctly aligned, the surgeons performed posterior cervical fusion from C3 to T3, with laminectomy at C5, C7, and T1. The patient’s neurologic status was monitored throughout to ensure that his spinal cord wasn’t damaged.

A few days after the surgery, the patient was discharged from the hospital and went to a skilled nursing facility. Weeks later he was walking again. 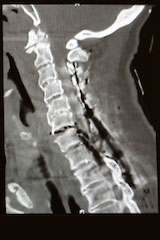 The patient’s neurologic function and rapid recovery are unusual for patients who experience traumatic injuries to their spinal column, Goodwin says. This is in part because patients with such a severe injury to the bones of the spine also experience significant injury to their spinal cord, resulting in neurologic deficit. These patients often are paralyzed immediately and commonly aren’t walking even after one year.

This patient’s good outcome can also be credited to Duke’s collaborative efforts, Goodwin says: “This required a coordinated effort by everyone involved, starting with the EMS team that made sure to keep him immobilized during transport, to our entire surgical team, to the skilled nursing facility that helped with his recovery.” 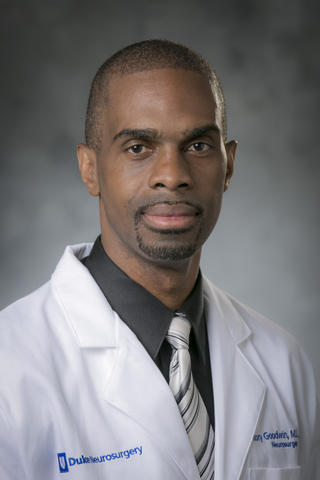