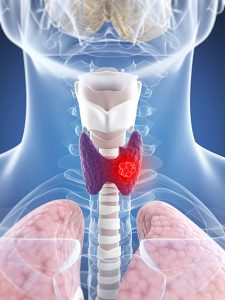 Increased exposure to chemicals used as fire retardants may be associated with papillary thyroid cancer, which is increasing at the fastest rate of any cancer in the United States.

A Duke research team found a significant association with higher exposure levels of certain flame retardants in household dust and papillary thyroid cancer. The results of the study conducted by the Duke Cancer Institute and the Nicholas School of the Environment at Duke University were reported April 1, 2017, at the annual meeting of the Endocrine Society.

“The incidence of papillary thyroid cancer has risen an average of 3.6% per year in the United States for the last 2 decades,” said co–senior author Julie Ann Sosa, MD, chief of endocrine surgery and leader of the Endocrine Neoplasia Diseases Group at the Duke Cancer Institute.

Sosa says the increasing incidence is real—not just the result of overdiagnosis. Thyroid cancers of all sizes are increasing as well as mortality from the disease.

“At the same time, exposure to flame retardant chemicals also has increased,” Sosa says. Environmental exposures might be another potential explanation.

The implications are profound, Sosa says, because papillary thyroid cancer typically affects younger women. “Since most people don’t succumb but rather live with the disease, there are profound financial and quality-of-life implications for the patient and family.”

Flame retardants are endocrine-disrupting chemicals that can affect thyroid function, Sosa says. “Our study explored whether there is an association between these chemicals found commonly in the home and having thyroid cancer.”

Sosa and co–senior author Heather M. Stapleton, PhD, an associate professor of environmental chemistry and exposure science at the Nicholas School of the Environment at Duke, led the interdisciplinary team that studied 140 patients with and without papillary thyroid cancer. The patients had lived in their homes for an average of 11 years, providing a population with long-term exposures in the home that could be characterized by analyzing home dust samples.

The researchers collected household dust to measure the levels of flame retardants in the home environment. They also analyzed the participants’ blood, focusing on biomarkers for polybrominated diphenyl ethers, a class of flame retardants comprised of the most commonly used chemicals to reduce flammability in furniture until they were phased out in the early 2000s because of their toxicity and human health concerns.

Exposures to 2 particular chemicals—decabromodiphenyl ether (BDE-209) and tris (2-chloroethyl) phosphate in dust—were the most strongly associated with higher odds of having papillary thyroid cancer.