A female in her 70s experienced weakness in her legs, trouble swallowing, and several falls. When she fell and couldn’t get up, she called an ambulance and was transported to a local hospital.

Physicians at the hospital consulted Duke Health’s neurology experts, who suggested a diagnosis of Guillain-Barre syndrome. The local hospital initiated a standard treatment for Guillain Barre—intravenous immunoglobulin (IVIG)—but the patient did not respond after two treatments. Because of a rapid deterioration of muscular function, she was transferred to Duke Hospital overnight. The deterioration ascended from her feet and began to compromise her pharyngeal and respiratory muscles.

“When I arrived at the hospital, she was decompensating quickly. She was taken to the neurological ICU where she was intubated and placed on a ventilator,” says Jordan L. Mayberry, MD, a neuromuscular specialist on duty that day. Mayberry was concerned by her lack of response to IVIG. To head off any further deterioration, he made the fast decision to change to a treatment the local hospital did not offer.

What therapy — offered at Duke but few other North Carolina hospitals — did Mayberry institute for a better chance at speeding the patient’s recovery?

Although IVIG is a standard treatment for Guillain-Barre syndrome, it often has a delayed effect. “Plasma exchange often turns things around faster, especially in somebody who is decompensating as this patient was,” Mayberry says.

IVIG infuses the patient’s blood with immunoglobulins designed to rally the body’s own defenses. PLEX cleanses the blood directly of the inflammatory molecules that are attacking the body in Guillain Barre. Mayberry likens it to dialysis: “It sucks out the bad components of your blood, separates them out, and gives you back your good components along with some fluids.”

Guillain Barre—also known as acute inflammatory demyelinating polyradiculopathy—affects one to two per 100,000 a year in the U.S. The condition is usually sparked by an antecedent infection that ramps up the immune system to such a degree that it attacks one’s own nerves. If an intervention can stop and reverse the attack on myelin, the sheath can begin to repair itself. PLEX can work in similar fashion to treat other neuropathies caused by inflammation and autoimmune disorders, and Duke is one of the few centers in North Carolina that offers the therapy.

PLEX is more invasive than the simple infusions of IVIG—an interventional radiologist inserted a port in the patient’s neck. An advanced practice provider with specialized training brought the equipment to the patient’s bedside to spend several hours administering the treatment. A standard course is five sessions given every other day. Like most patients treated with PLEX, this one began to respond after the first two sessions.

At the time of her discharge to an inpatient rehabilitation facility, she was breathing on her own, swallowing well, and had regained some arm strength, but needed a wheelchair. After three weeks of rehab, she returned home.

When she came for a follow-up visit several weeks after discharge, Mayberry was surprised and gratified to see that she had regained enough strength to walk on her own. The odds of such a recovery were against her because of several poor prognostic factors, such as her age, the fast onset, and the need for intubation.

“She’s made a great recovery,” Mayberry says. “I think her successful recovery was related to how quickly we were able to get her intubated to help her breathing and get the plasma exchange started.” The patient has continued to improve at home.

The patient’s rapid deterioration required Mayberry to treat her using a clinical diagnosis based on her symptoms, but Mayberry notes Duke also offers advantages in the accessibility of technologies to precisely diagnose neuromuscular disorders. Diagnostic options such as  electromyography and nerve conduction studies are offered both at the bedside and on an outpatient basis at Duke, a ready availability that few other institutions offer, Mayberry says. 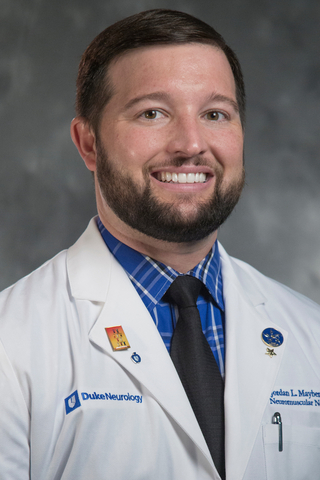