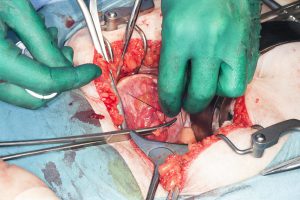 Performing hysterectomy in addition to risk-reducing salpingo-oophorectomy (SO) in women with the BRCA1 germline mutation is cost effective and extends survival compared with risk-reducing SO alone, report Duke researchers in a new study published in June 2017 in Gynecologic Oncology. The results are a follow up to the recent finding that the BRCA1 mutation is associated with serous uterine cancer.

Historically, hysterectomy in women undergoing risk-reducing SO as prophylaxis for breast and ovarian cancers was considered to be elective. The relationship between BRCA1/2 mutations and uterine cancer was controversial, and hysterectomy carries both short-term surgical risks and the potential to increase the risk of pelvic organ prolapse and urinary incontinence later in life.

However, in 2016, the results of a multicenter, prospective, cohort study led by Duke clinical cancer geneticist Noah Kauff, MD, showed a disproportionately high incidence of serous/serous-like uterine cancers among BRCA1 carriers, suggesting that the benefits of performing hysterectomy at the time of risk-reducing SO may outweigh the risks for this population.

“We have always counseled women with BRCA1 mutations that removal of the tubes and ovaries improves their long-term survival, while removing the uterus (hysterectomy) is purely elective and does not reduce their cancer risk further,” explains Duke gynecologic oncologist Laura Havrilesky, MD, MHSc, the first author on the 2017 study. “The new evidence from Dr Kauff’s team made us want to explore the expected benefits and costs of doing a hysterectomy either during the initial risk-reducing surgery or in the years after removal of the tubes and ovaries.”

To determine whether the addition of hysterectomy to risk-reducing SO is cost effective and extends survival for a 40-year-old woman with the BRCA1 mutation, the researchers constructed a modified Markov state transition model, using undiscounted life expectancy and discounted cost effectiveness as primary outcomes. The risks of developing and dying from serous/serous-like uterine cancer were modeled using data from published studies and registries. Surgery costs were estimated using published claims data.

Havrilesky notes that, although adding hysterectomy to risk-reducing SO extends life expectancy by only several months per woman undergoing surgery, for the approximately 3% of women who avoid serous uterine cancer down the road, the benefit will be seen in years of life gained. The study’s analysis also suggests that removal of the uterus is cost effective, meaning that the added cost of surgery is paid back in terms of the extra life expectancy gained.

“We now have sufficient data to counsel BRCA1-positive women on the expected benefits and costs of adding hysterectomy to removal of the tubes and ovaries as a risk-reducing strategy,” Havrilesky concludes.